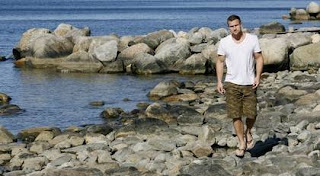 Markus Naslund was interviewed by HockeyExpressen.se recently after a quiet summer back home. He says he has a lot to prove after 2 sub-par seasons....blah blah.
He employed a personal fitness trainer from Vancouver this summer. Is it just me or does he look more bulky in that photo?
He said he feels more prepared for the season than ever before.
I think it's fair to say that I am bitter towards the guy. Never was a fan except for those uber-productive years of his.
Regardless, it makes me even angrier when he says things like "I've never been more physically ready to play" for example. It just proves the point that he didn't want to be here, and was not playing to his potential. Or, in other words, WASTING OUR TIME.
Now he plays for the enemy Rangers. How fitting. Now I like him even less. The only thing that could make me dislike him more is if he scores over 35 goals and 90 points on Broadway.

Photo credit: Hakan Nordstrom of HockeyExpressen
Now on to a player that actually matters on this side of the continent. Today there is a great piece by Jason Botchford of the Vancouver Province on Steve Bernier. Bernier talks about why his insecurities started (getting sent to the minors in San Jose while he was kicking ass and taking names), the trade to Buffalo, and what he wants to do in Vancouver.

"I don't want any doubts any more. There's a lot of very good players and I want to prove myself. I want to play a lot of minutes."
I need to work hard every game, every shift," Bernier said. "My goal this year is that every time I'm on the ice, people know it. Either I make a play or I help my teammates with a big hit. Every shift I want to do something that has an impact on the game."

Although concerned about his mental state, I can't wait to watch Bernier play in a Nucks jersey.