Share All sharing options for: My Top 10 favourite Canucks since 1994 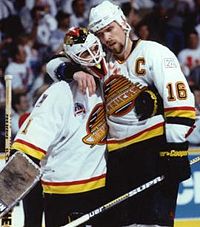 10. Dave Babych- Steady. Reliable. Was that Game 5 against the Rangers in 1994 that Babych scored on Richter and Bure jumped on him? That was that wacky 6-3 game.
9. Gino Odjick- Hard not to like Bure's bodyguard. One tough son of a bitch that few brawlers could beat.
8. Martin Gelinas- Always been a fan of Gelinas. Never took night off.
7. Greg Adams- I was pissed at Gus when he scored the OT winner to eliminate the Leafs in '94, but who could fault his stamina?. Gus had so much passion as a Canuck. Oh, the OT goal in game 1 of the '94 Finals was pretty sweet as well.
6. Cliff Ronning- 6 years he was a Canuck and had his best years here.
5. Pavel Bure- Fancy pants. One of the most entertaining players in NHL history. In the end, he left Vancouver under lousy terms. He was being paid $8 million per season by stated "not enough privacy in a small, Canadian market, a variety of disputes with management and a desire to play with a winning team." Ooo, that reminds me of Markus Naslund a bit. Maybe this guy shouldn't be so high on my list. But while he played here he was tremendous. Only his ACL stood in the way in the end.
4. Brendan Morrison- Iron man. Dedicated Canuck. Gutsy BC boy. What's not to like? I'm torn about his leaving here this summer.
3. Willie Mitchell- Here is another BC boy. Mitchell is a warrior in every sense of the word. A master of the stick. A reliable defenceman and composed as well. This guy should be the new captain of the team.
2. Roberto Luongo- When he's not distracted by a pregnant wife..... It remains a joy to watch the best goalie that this franchise has ever seen play on most nights. Love his desire to win....when he's not distracted. Luongo will call out his teammates after a shitty game. Maybe the "c" should go on his jersey. Just stop the diving, Louie.
1. Trevor Linden. Nothing needs to be said here. I wish he was in his 20's again and playing on this current team.