Luongo speaks to Canucks.com from his home in Florida

Share All sharing options for: Luongo speaks to Canucks.com from his home in Florida 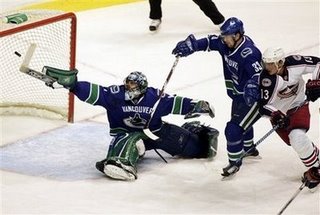 "I was really sad to see guys like Markus and Brendan leave the team. They were there before I arrived and they were a really big part of the franchise and they were great guys to be friends with. It was really sad for me to see those guys go, but unfortunately that’s part of the business," Luongo says. "At the same time we’ve got some new guys in and I’m anxious to get things going and see what kind of statement we can make this year."

Canucks.com mentioned something I had forgotten: that Louie had played with Ryan Johnson and Darcy Hordichuk in Florida.

"Those are the types of guys you want to have on your team and in the locker room. They have big hearts and they play hard every night. Those are the kind of players you need on a team."


Canucks.com also mentions a very big matter that can get Canucks fans even more excited: that Gina Luongo and their 4 and a half year month old daughter Gabriella will be joinin Luongo on his trip to Vancouver just before training camp.
What I would wish for is that she would stay in Vancouver, but I'm not sure the article is saying that. What it is saying is that Luongo is very happy with his family life. The final weeks of last season were the worst he has endured because the team that wa expected to make the playoffs didn't.
With no distractions, we can expect a stellar performance from Luongo this year.
Louie also has expectations for the team, and yes, he will take on a bigger leadership role this season.

"We have one of the top defensive corps in the league when everybody’s healthy. So there’s no reason why we can’t be competing with the top teams in the league. For me personally, that’s the way I look at it," he says. "The main thing is trying to stay healthy all year."

No kidding. I'm optimistic. How about you guys?
Check out more of the article here. Luongo also talks about a conversation he had with Mike Gillis, his health, and more.

PS: I was wondering if Luono knows Demitra at all. I think he does, but for all the wrong reasons!

Example 3 Yeah, Demitra owned Louie in shootouts. Hell, he owned him on long blasts too.
Ah well, he's on OUR side now.