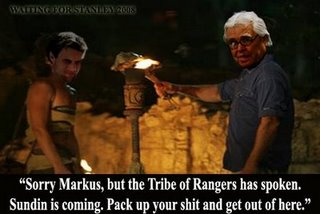 And Larry Brooks would know, right? Oh yeah, he would. But then again, so would most of us. Do you see the Rangers dumping Gomez or Drury in a trade? Not a chance? How about Naslund and Zherdev? Well that would be funny, actually. I would split my sides open laughing if Naslund ended up especially on some lousy team via trade. Especially after he chose the Rangers because he wanted a chance to win the Cup. (**scoff**) (Is there a no-trade clause in Naslund's contract with NYR?) Naslund and Zherdev take up over $8 million of the Rangers' salary, which is needed to bring in Mats, as the Rangers are just under the cap.
But Sundin's agent JP Barry has said recently that there are teams out there who are willing to make room for Mats, so you can't always tell for sure. Then again, how many times has Barry been full of shit in recent weeks? He has been changing his stories more than Bryan McCabe changes his hair color!
I know how every swinging d**k wants to play for the Rangers, but I really don't think the Rangers are going to land Sundin.