Henderson scores again....Ken Henderson that is!

Share All sharing options for: Henderson scores again....Ken Henderson that is! 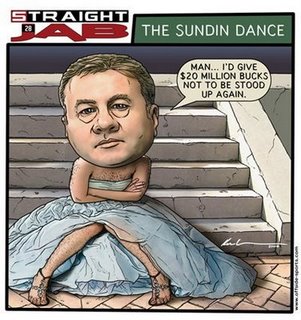 In case you have been hiding under a rock....No one captures hockey stories (especially, he covers several sports) better artistically than BC-boy Ken Henderson. His latest Gillis cartoon (pictured) is just plain ol' bloody hilarious. It's humorous, true and saddening all at the same time.
Henderson can put together side-splitting comic pieces as well as fascinating memorial imagery (aka Bourdon and Lupil).
He contributes to the Georgia Strait and has his own site.
Henderson is no slouch, and he comes loaded with creds too, as his bio points out.
Keep up the great work, Ken!
PS- Love how Bettman always has basketball imprints on his head!