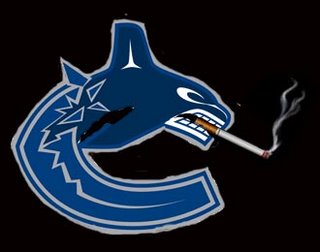 According to a Canucks fan who went to GM Place for the 3 Doors Down concert recently, there were signs posted there that stated something along the lines of

as of sept 15th you can no longer go on the patio or designated areas during intermissions for any event including Canucks games for this year.

Well isn't that special? So where can smokers go now, in the middle of Pacific Boulevard?
A massive discussion took place at CDC about the matter today. Besides the typical pro and con arguments that occur between smokers and non-smokers, one person had mentioned that people won't be allowed outside the building in between periods. That must be a load of horse manure. I'm sure people can stand outside and get some fresh air. But smokers will have to walk further away from GM Place now to enjoy the sweet taste and sensation from a cigarette.
The anti-smoking lobbyists score another point.
It's becoming more and more difficult to be a smoker nowadays, as our conveniences are being taken from us, like the "you can only smoke 6 meters from a doorway" rule. I think somebody on Mudd Ave in Edmonton mentioned that you would have to stand in the middle of the street to smoke if you technically abided by the laws.
So I am here to say: F**k the laws. I'm not going to stand in the old smoking areas at GM Place and smoke anymore. I'll walk a little further away to get my fix. But when walking downtown, I am not going to cease smoking because I technically walk past a doorway. It's getting a little overboard. And if anyone gives me grief I'll tell them to shove it.
Do they have cigarette police yet? That's probably coming up next.
I understand how 2nd hand smoke can be an inconvenience to non-smokers. But in the outdoors, a scent of it isn't going to kill you. Some dude is blowing the smoke in your face? Tell him to cut it out or move northwind of his smokey trail.
Ironically and hypocritically, most of the people who shame us/ and point the almighty finger for being addicted or harming ourselves are people who eat foods loaded with MSG's and special coffee's from Starbucks. Hey, don't tell that shit is good for you! Once/if they phase out smokers completely, that crap is next in line to be scorned.
But this is the way this end of the world is heading. Tobacco takes the hit for every illness or disease that can happen to someone. Some of it is justified, some of it is paranoid made-up bull shit. See eating improperly, not exercising, drinking, and bad genetics as examples.
So the powers that be have taken smoking out of flights, restaurants, bars, streets...what the hell is next? All I know is I'm fine with the indoor policies. But the outdoor ones are pathetic and I am not going to cave in.
There are a LOT of smokers at Canucks games. The decks and ground levels are packed every time the buzzer sounds to end a period. Hell, have you ever seen the patios for the luxury suites/boxes? Packed. This will take some time for the butt-sucking masses to get used to.
There could have been a diplomatic solution to this. Maybe they could have painted a large circle on the ground 100 feet away from the building and called it the smoking circle where all the smokers could do their thing. Some non-smoker walks through the circle and starts crying: TOO DAMNED BAD!
Until smoking is outlawed completely, it is my current right to smoke as a free Canadian citizen. It is also your free right to express your annoyance with it. So if I'm smoking 6 meters away from a doorway somewhere outdoors and I hear one anal non-smoker whine about the smoke going in his/her face, I'm going to tell that person to suck on an exhaust pipe, eat a chemical-filled hot dog and have a shitty day.
I'm a smoker and I love it. I'm not loving this culture's phase-out policy.
Here's a special message from Dennis Leary that sums up my attitude: