Eklund's Sundin AND Sakic to the Avalanche rumor is potential horse dung, yet you know some have dreamed about it

Share All sharing options for: Eklund's Sundin AND Sakic to the Avalanche rumor is potential horse dung, yet you know some have dreamed about it 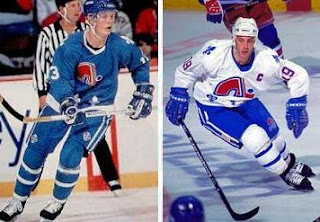 And a former player who played with Sundin and Sakic added:

"Look out for Colorado with Mats. I am not convinced that Sakic and Sundin aren't talking or in on something together."

Well, that took him long enough to put that into print. Several people including myself have been questioning that possibility for weeks now.
Fans of the former Nordiques would drool at that possibility. Sundin never did make it to Colorado as a player. On June 26 1994, Sundin, Garth Butcher, Todd Warriner and a 10th round pick were shipped to Toronto by Quebec in exchange for Wendel Clark, Sylvain Lefebvre, Landon Wilson, and the 22nd overall pick in 1994 (pick turned out to be a bum.)
Just under a year later, the Nordiques died and moved to Colorado in 1995.
As you know, the Avs won the Cup the following year in 1996, with only Sylvain Lefebvre (from the Sundin trade) reaping the benefits.

There is no doubt that Sakic and Sundin had chemistry in Quebec, if you can remember that far back. The numbers don't lie.

The issue with a potential double-whammy Sakic-Sundin signing in Colorado is CAP SPACE.
According to NHLsalaries.com, the Avs are sitting at $46.07 million right now. Not even close to enough room to absorb both salaries. They would have to move Ryan Smyth's $7.25 million salary to make room, or take a major pay cut. Don't see it happening.

Nope. This is just another dream scenario that will naturally be looked at and pondered the longer these guys hold out to make up their minds.