Share All sharing options for: Demitra a Prize Catch? 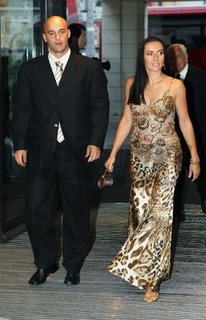 Let me quote some of a Canucks.com article from yesterday that falls under the above title (minus the question mark):

On July 1, Vancouver Canucks general manager Mike Gillis stood waiting.
With an elevated heart rate, heightened senses and sweaty palms, Gillis, alongside 29 other GMs aligned on the dock of NHL free agency, waited.
Rod and reel in hand, the new leader of the Canucks baited his line and waited…and waited…and waited.
Day one of free agency flew by, so did day two, day three followed suit. Each day of the next week was a carbon copy of the first, Gillis had a few nibbles, but no one took the bait.
Then, out of nowhere, Gillis reeled in a keeper.
Name: Pavol Demitra
Size: 6-feet, 200-pounds
Skill: In abundance
Without question Gillis landed a prize catch.

Talk about glamorizing a "good" signing. No, not a "great" signing. Demitra is not necessarily a "keeper".
He is not necessarily a prize catch. He has 2 goals in his last 11 playoff games (with the Wild). He has only played 2 full seasons in his 10 year NHL career. He is a .93 points per game player. His last great season was with the Blues in 2002-03 (when he actually played a full season.)
Oh and speaking of the Blues, Demitra alluded to them in an interview with Canucks.com.

"I just like to have freedom on the ice," said Demitra, adding that his numbers dipped last season in Minnesota because he was bogged down as a result of their defensive minded offence.

"I played my best hockey when I was in St. Louis and I played with guys like Keith Tkachuk and Scott Mellanby. Those guys always want to be the best and I like guys that drive to the net and who work hard and I like guys who give me the puck as soon as possible so I can make a play."

OK, I have a few issues with those statements:

1. He likes guys that drive to the net. So what does Pavol do... clean up the garbage? If he doesn't like to go hard to the net then he may not gel with the Sedins, right? Isn't that type of player what the Sedins need (Carter/Pyatt)?

2. He likes to have freedom on the ice and he scored less in Minnesota because he was "bogged down because of Minny's defensive minded offence". So what the hell do you call Alain Vigneault's system then? He doesn't allow freedom on the ice. His forwards have to backcheck and be defensively responsible.
Is Mike Gillis encouraging a new system from Vigneault? I hope not. Did you see Datsyuk and Zetterberg having "freedom on the ice"? No, they played a tight system. And it worked. I can't see Van being any different than Minny in terms of playing styles, unless a change is going to happen.

OK, back to the "prized catch" thingy. This is (and I may be overreacting a bit), the bullshit that I hate about politically correct, say-no-evil writers from team sites. It's a far fetch to be blowing smoke up Demitra's ass already. To me, he has something to prove still. He has to stay healthy AND put out AND play the system...without complaining.I don't care if he says he loves the city, and that it's good for his kids, and that he and Gillis are buddies. It means nothing unless he is a difference-maker for the Canucks. The happy-schmappy fluffy stuff be damned.
Oh, and I'll tell you what a "prized catch" forward would have been:

1. Brian Rolston. Signed for 4 years at just over $5 million per season. He scored 31 goals in each of his last 2 seasons with the "defensive" Wild.
2. Andrew Brunette. Underrated forward signed for 3 years and $7 million with the Wild.
3. Marian Hossa. Yeah, a traiterous bastard, but more proven offensively.
4. Sundin. Nuff said.

But those are the fish that Gillis couldn't catch or has not yet caught, obviously.

Until Demitra proves himself with the 4 things I mentioned above, I am not calling him a prize catch. The same goes with Wellwood and Bernier. Jeez, is Vancouver a therapy session or what? Gillis is believing that those 3 players are going to turn their fortunes around. And I hope he's right. I am cautiously trusting that he is right.

Check out the Canucks.com article here.