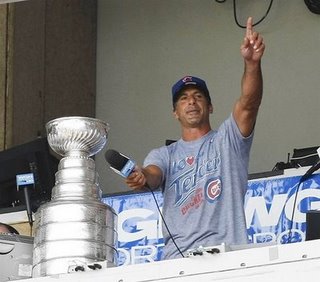 This past Friday, Chelios reportedly sounded "pretty darned good" singing "Take Me Out to the Ball Game" at the Cubs game, but when given the honor of throwing the first pitch, he threw it high over guest catcher Eddie Vedder. He was given a second chance and threw that pitch a little high as well. However, Vedder reached high and least caught that one. The crowd gave Chelios a "rousing" ovation when he was introduced. He even had the Cup beside him on the pitcher's mound.
But that isn't the really big news of the day of Chelios in Chicago. What Chelios said after the ball game (a lopsided loss by the Cubs by the way) is what is somewhat controversial.

"I know I bring it (Stanley) with the wrong team, but at least I brought it home."

"You don't want to hurt anybody's feelings. I've found a new home with Detroit, but Chicago is always going to be home and my parents are here," he said. "I intend on coming back here someday and living the rest of my days whether it's as a player or just somehow maybe involved with the Blackhawks."

Well, Chelios is 46 now, the oldest person to win the Stanley Cup, and reportedly already has a verbal deal in place with the Red Wings that just has not been announced by Wings' GM Ken Holland yet. His agent has confirmed that. The former Hawk had great things to say about the current Blackhawks team.

"They've made all the right moves," said Chelios. "They've got a great young nucleus with this team and the management, with what they've done is just tremendous for the fans.
It's been a long time coming since you felt that buzz. I can't say I wish I was a part of it right now because I'm a Red Wing, but it's great to see the fans excited about Blackhawks hockey."

So, as careful as Chelios may have sounded, he just couldn't avoid some Blackhawks and even Sox/Cubs fans' backlash by bringing Lord Stanley to a city that is the enemy of his current team Detroit. Examples:

- This writer from the Chicago Sun Times suggested that Chelios may have brought bad karma with him, as both the Sox and Cubs lost their games. Funny, but I don't believe in Karma.

-Fan Backlash #1: ...just remember the nasty,deliberate, try and knock him out hit he made last season against the Hawks' Kane.
He lost me there, he should have been booed Friday by any hawks fans attending fridays game at wrigley.

-Backlash #2: Class is Hull, Makita and Esposito not a cheap shot artist like Chelios, i remember his first game back after the trade when he was booed off the ice, the same thing should have happened at Wrigley. Hopefully he will never be associated with the Hawks again in any capacity.

-Backlash #3: He could take it to schools to friends, but to use it as a Chelios congratulatory party at Wrigley showed chelios doesn't care about us..he cares that chelios is still in the limelight. He didn't cause the Cup drought but he doesn't feel our pain either.
I tried to hear Detroit sucks in the background, but didn't. You don't know how much I wished that I could have be at Wrigley because HE WOULD HAVE HEARD ME yelling DETROIT SUCKS!

-Backlash #4: CC can stick the Cup where the sun don't shine. He wants to come back to Chicago? Yeah when he's in his 60's...The Hawks can use him like they're using Hull,Makita and Espo...I don't care what he's done he's a fricken Red Wing...

The above comments are from the Daily Herald. 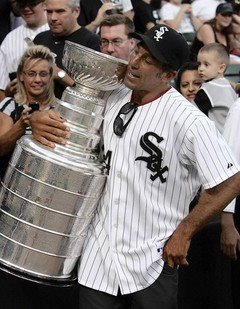 I can understand the bitterness of the fans. They have endured so much shit over the past decade or so. When Wirtz Sr. traded Chicago-born Chelios to the Wings in 1999 in exchange for Anders fricking Eriksson and 2 first round picks (one turned out to be Sandy McCarthy), it was just another added blow. Two years earlier he had traded Ed Belfour to the Sharks for Chris Terreri, Ulf Dahlen and Michal suck Sykora.
The previous year, he traded the man Jeremy Roenick to Phoenix for Alexei Zhamnov, Craig Mills and a 1st round pick: Ty "who?" Jones.
Years of mediocrity ensued. But to trade the great Chelios to the enemy was a serious blow.
And that creates hate. Long-lasting hate. Especially when he has success with the enemy.
As an outsider, I would think that Chelios' presence on the Hawks' young team would be welcomed. He can still play. But this scenario is becoming more and more unlikely. Chelios looks to finish his playing years with the rival Wings and it will take years for some fans to get over the 'hate' part. That's what's beautiful about hockey and sport. Rivalries are awesome! You can be a star and saviour for your team for years, but damn you if you ever choose or are successful with an enemy team!
Personally, I know Chelios is easily hated on the ice. But I was a major fan of his especially when he played for Chicago. But I didn't like him going to the Wings either. I hate Detroit!
Regardless, here are some great Chelios memories from his days in Chicago (plus a few others):

-Ooo. Caught on tape, Chelios says to a host of a show that he would NEVER play for Detroit.

- Chelios, with the Red Wings, had 4 assists against Vancouver this night. Watch him gloat to the fans in GM Place when he was given #1 star of the game. Sorry Nucks fans, but that was pretty funny.

-Chelios as a Hab destroys Brian Propp with a viscious elbow. Dirty, Cheli.

-Ron Hextall can't contain his anger anymore and attacks Chelios in an act of revenge for the Propp hit.

Images from the Chicago Tribune.