Bob Gainey feeling a little pessimistic about Canadiens getting Sundin

Share All sharing options for: Bob Gainey feeling a little pessimistic about Canadiens getting Sundin 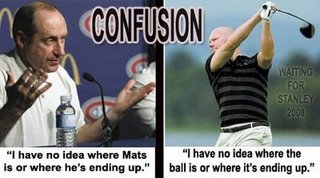 "It's hard to be optimistic. We haven't had much contact with him. It appears he's not interested. He hasn't asked many questions about the organization."

"We haven't spoken to Sundin's camp for at least a week. There's nothing new, he hasn't decided anything yet. He told me he'd decide in August and today's the 26th. We'll know, provided he respects his own due date, his decision should come sometime throughout the next week. "

"We're going to wait for his decision until September if we have to. On paper, we have the perfect team for him. There's certainly room for him with our team."

"I know that certain other teams are presently over the salary cap. We'll have to see...If Mats doesn't join us, maybe we'll discuss things with those teams."

Bwaha! I still don't see Sundin going to Montreal anyway. Never have believed he'd go to the most fierce rival of the Leafs.
I wonder if Gillis is feeling the same way that Gainey is.
Sundin, as Gainey had mentioned, had said that he would make his decision in August. Well, there are only 5 days left in August, Mats. Hope you got your ducks in a row.

Also, the Canadiens have unveiled a logo for this season celebrating their 100 year anniversary. The logo will be displayed at center ice and as a patch on Canadiens jerseys. It is pictured below. 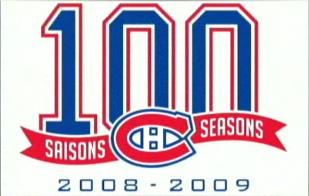