Share All sharing options for: Bertuzzi formally introduced to Calgary fans and media 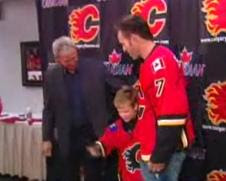 "Here you can't go five or 10 games without a point without anyone noticing and there you can go under the radar a little bit," Bertuzzi said. "That's one thing that I think is going to benefit not just myself but this team. I think you are under the gun here and under the pressure of having to perform."

Big Bert is looking forward to the extra ice time he'll get in Calgary. He stated basically that he couldn't get his game going in Anaheim while playing only 10-12 minutes per game.
So what do you predict Bert will do in Calgary playing with Cammalleri and Iginla?
I guess about 25 goals and 50 points. Nothing boosts a player's output like playing with Iginla.
But we'll see. Bert has been on the decline. This is his big chance to re-stake his name as a premier power forward.
Canucks fans are going to see a lot of him this year.
Notice how he's wearing #7. A changeup there. Jim Vandermeer wears #4 and Rhett Warrener wears #44.
Mike Cammalleri, Rene Bourque, Curtis Glencross and Andre Roy were also introduced today.
More on the Bertuzzi intro plus a clip at TSN.