You won’t have Markus Naslund to kick around anymore

Share All sharing options for: You won’t have Markus Naslund to kick around anymore 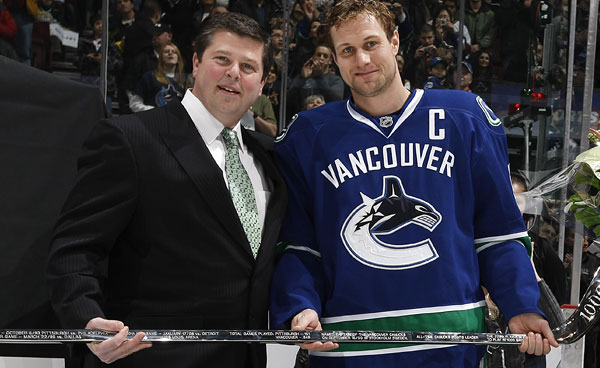 The Reality
1. We know Naslund has gone down hill over the years, helped by the fact management never found linemates that complimented his skill as well as Bertuzzi and Morrison.
2. This officially and emphatically closes the door to the Burke/Keenan/Crawford/Nonis era (well Nonis still has some lines in the water). What started a decade ago can safely be called over now. Which isn't bad; Gillis needs to make his mark on the team somehow though he is far from a good start.
3. It's not an easy path for him as a Ranger either. He's Jagr's fill in, so while he escapes the limelight he may very well end up with the C back on his chest (though not likely) in a city where the light is equally harsh. I've seen what the Garden does to players they don't like. It's not pretty.
4. Like Hossa, he made a personal choice. Be it the travel, be it the change of pace, be it (again like Hossa) a final stab at a Cup and not in a rebuilding/retooling/re-whatever movement like the Canucks are on, he felt his chances were better at personal and team success with the Rangers. No one can blame him for the choice.
5. Even if Naslund had resigned, the same problems would have persisted that have for the past few years: no linemates, more pressure, more (ill-placed) anger from fans who see the price tag before the player, etc. All of it wouldn't have changed. Not fair for us or him.
6. It's not a question of how you replace Naslund, it's a question of how do you fill those 25 goals on a team that already has a putrid offense.

The Emotion
1. His history with the club can't be ignored: from the doghouse with Keenan to an All-Star under Crawford to the face of the team under Vigneault, he has a unique and unquestionably strong history with this team.
2. His numbers with the club can't be ignored: franchise goals leader: 346, franchise points leader: 756, franchise hat-tricks leader: 10 (tied with Tony Tanti), franchise record for single-season points by a left wing: 104.
3. The WCE: Sure, I'll bring up the West Coast Express because those were the monster days. Morrison was the quiet passer, Bertuzzi was the hulking forward causing havoc in front of the net and Naslund was the finesse sniper who finished most of those plays.
4. His team identity: 12 seasons, captain for seven and there for all of the bigger (and rare) playoff runs this team had? Some like me will see the uniform and naturally think of him. Linden went out quietly on this bad team in April, but that skate around the ice after the game is ingrained in many people's minds. It would have been nice to give Naslund a similar send off; one last chance to put all good and bad behind him and let GM Place honor him one last time as a player.

What happens now
1. I am happy that Naslund got the situation he wanted. I am glad he gets to escape the asylum and play on a big stage in front of a team that has rebuilt itself the past few years and could very well get a chance at the Cup in what will be his two year tenure. I hope he does well personally...but, the Bure clause comes into effect: once I see that Ranger blue on him, the visceral hatred will rage forward. You're the enemy now champ (wink wink)
2. The Canucks? I'm sure people will immediately think Jagr (surely he'd jump at 10 million a season no??) but that's not the answer. I have no idea what Gillis is up to or how many things have gone wrong for him this week despite his very best efforts. Maybe players don't want to touch the franchise and maybe the GM's do hate him. But them's the breaks: he is currently at the helm of a sinking ship, a ship that just saw the Naslund era end under his watch. Only he can make sure that, in several months time, we are eager to watch (and PAY) to see his new era and not remembering and bemoaning the loss of the old one.

I sure don't envy him.

3. Anyone heard what Luongo has been thinking this week?