Share All sharing options for: Where is Sundin Part 3: French hijack crisis 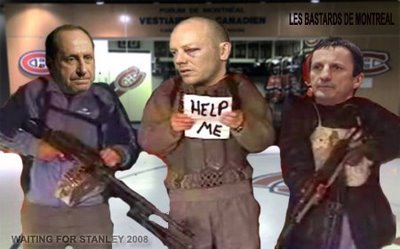 Waiting For Stanley has sources all over the globe. Shockingly, one of my best sources in Montreal just happened to be in the old Montreal forum tonight buying Habs jerseys to use as toilet paper, (yeah he's rich!) There he came across the hijacking of Sundin by Bob Gainey and Guy Carbonneau. It appears that the Canadiens have one-upped Mike Gillis this time.
My source tried to understand what Carbonneau was yelling at him in french (because he's from BC and not bilingual) and he barely made out the word "image" (pronounced "eemaj") which is french for picture. Yeah he heard that word in a lousy french film when he was younger, or maybe it was in a girlie mag, right Mr. X? I guess Carbonneau wants to send a message to all the Sundin-chasers out there. So does Sundin, apparently. My source also said that Bob Gainey just stood there with no expression on his face, which doesn't suprise me one bit.
It looks as though the two crazy Hab freaks are going to keep Sundin at gun point until August 1, when Mats is supposed to make his decision.
Word is that Sundin tried to call Cliff Fletcher, but Cliff wasn't much help. Apparently Cliff offered a trade to Gainey and Carb for Sundin's life but Mats refused it. Poor Mats is so terrified, he's forgotten that he is not a Leaf anymore.
All is not lost though. Another one of my most closest sources has told me in the past hour that Mike Gillis is on a plane to Montreal right now to try an old school takedown. Guess who's joining him? Harold Snepsts and Garth Butcher. Run for your lives, boys!

Gad, I hate hangovers. And I hate waiting for August 1.
Oh, by the way, this is a response to this.