What is Mike Gillis' backup plan?

Share All sharing options for: What is Mike Gillis' backup plan? 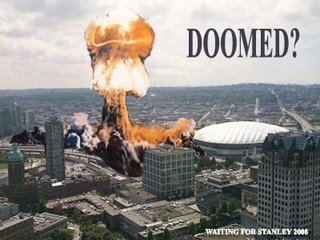 Mats Sundin's "thanks but no thanks for now" statement this morning was a real stinger. Not only because I thought the idea of him playing here was great, but mostly because it seems that Mike Gillis appeared to have invested most of his time on July 1 trying to pry Mats away from his wife, while other serious UFA's slipped away to other teams. Sure, Gillis locked up Wellwood, but the shoring up of the 4th line with guys like Ryan Johnson and Darcy Hordichuk on the biggest hockey day of the offseason is leaving most Canuck fans with a bitter taste in their mouths.
Signing only Nolan Baumgartner today isn't making things better.
Who's left as far as decent forwards go?

-Teemu Selanne. Don't see it happening.
-Mark Recchi. Sure, sign the BC boy up. He'd help out a bit.
-Yanic Perrault. Nah
-Jason Williams. No thanks.
-Joe Sakic. Not leaving Colorado
-Peter Forsberg. No one is talking about Peter the Fragile.
-Stu Barnes. Still has something left in the tank....but not as much.
-Ladislav Nagy. Only if you want to see me jump off a 50-story building.
-Pavol Demitra. The Demitra option looks better and better only because the Canuck situation is getting slowly worse and worse.
-Wes Walz. Always been a fan of Walz.
-Ruslan Fedotenko. No way.
-Miroslav Satan. Always wanted a Canucks jersey with Satan on the back. Ha. Skip this guy.
-Jaromir Jagr. As if he'd move here. Tempting somewhat.
-Brendan Shanahan. Absolutely.
-Sergei Fedorov. Haha...no way.

The restricted free agent list isn't so appetizing anymore either. View the full list of UFA's and RFA's here.

You can see the problem with the notable UFA's that I have listed.......aging, injury-prone. The only names on that list that would make you jump off your couch if we got one of them probably won't come here, or have no interest in doing so. What's Gillis going to do next...throw $10 million at Selanne? You almost have to show that excessive amount of money just to get guys to play in Vancouver. Like most people wonder...what the hell is so bad about Vancouver? It's a hell of a lot better than Edmonton!

So what the hell is going to happen now? It's turning into a deja-vu from last season in a sense. This is what Steve Tambellini was saying exactly 1 year ago (not quoted, but from a post I did):

Steve Tambellini mentioned today after Vancouver's signings that the acquisitions of Isbister and Ritchie were to shore up the bottom 6 forwards. He said that the team is being patient and waiting for other teams to get strapped for cash. Then Vancouver can explore a trade or buyout route later on to probably obtain a top 6 center, for one.

The people at the Canucks.com Message Board are trying to cope with this. Several posts include an interesting concept: Re-unite the West Coast Express.It's amazing how desperation can fuck up our common sense sometimes. What I mean is: I almost find that option intriguing right now. Fuck. All 3 players are available.
Speaking of that... why has no one taken Morrison or Naslund yet? Are these guys really as big of bums as some of us think they are?
Hell, today teams took Huselius and Avery for $4.75 and $3.88 million per season respectively. And no one bites on Morrison? I smell something fishy here. I get this feeling that Gillis is keeping these guys hanging around for some twisted reason. Don't you?

Given the well-documented theory that GM's may not want to deal with Gillis because he worked for the "other side of the fence" leaves me wondering..... where does Gillis go from here? Is it going to be another dismal year of us mostly relying on the Sedins for scoring again? This isn't an option.
Yup, as you can see, my optimism from yesterday has been flushed down the toilet.