Share All sharing options for: Wendel Clark and Doug Gilmour will have their banners raised this season 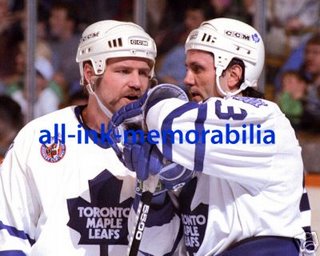 Clark will be honored on November 22 and Gilmour on January 31. Is there really any other 2 Leafs players that are considered more popular in Toronto over the past 25 or so years? 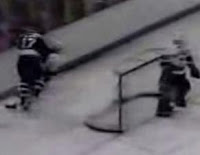 In 608 games with the Leafs, Clark scored 260 goals and 441 points along with 1535 penalty minutes. Hard to think of a better forward in recent history. Only problem is that his reckless style shortened his life span in the NHL. Too bad. Clark is still one of my all-time faves. Who could forget his playoff performance in 1993 when he scored 10 goals and 20 points in 21 playoff games? How about his tussle with Marty McSorley after Marty decked Gilmour in the trolley tracks?
Or how about his hat trick in Game 6 of that series to push the series to 7 games? Clark completely took over. What a beast.
Check out this top-notch Clark tribute video. 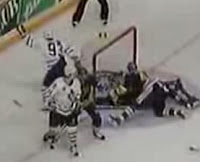 Doug Gilmour is my 2nd all-time fave player. In 393 games with the Leafs, Gilmour scored 131 goals, 321 assists and 452 points. That is 1.15 points-per-game. In 52 playoff games with Toronto, Dougie scored 17 goals, 70 assists and 87 points. That is a majorly impressive 1.67 points per game. Clutch.
Don Cherry had a fitting tribute to Killer in one his earlier Rock Em Sock Em videos.
I'll get into these guys more when they are actually honored. Being a Leafs fan through the 80's, I saw Wendel Clark be a shining spot on the club in the dire 80's and then through the better times after Fletcher acquired Gilmour in that raping trade with the Flames in 1992. That was a great team between 1992-94 especially.