Share All sharing options for: Vermette signs / Bowman to Chicago as advisor

"I don't think it would have been that nasty," Bryan Murray told reporters via conference call Thursday morning. "But certainly we're pleased to do it at the number we did. It took a long time to get done, but we're glad we could avoid it (arbitration)."

Murray should be happy about the price he is paying for Vermette. It's a 2-year deal at approximately $2.63 million per season. Vermette could have made more in arbitration, which was about an hour away.

"I’m happy. Ottawa is where I want to play hockey and I love the city," Vermette said after agreeing to the deal. "I love the fan base and the support we have there. We have a good team and I have some good friends as well."

So I guess you can take Vermette off the list of Canucks candidates. However, there is no talks between Andrei Meszaros and Senators management yet. It looks like Meszaros may be on his way out of Ottawa, leaving a huge hole on their defence. That may force Murray's hand into a trade. 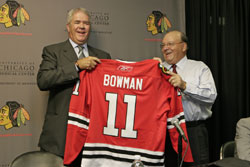 The rise of the Blackhawks continues, as should the excitement from the Chicago fanbase. The great Scotty Bowman has jumped ship from Detroit to the rival Chicago to become the senior advisor of hockey operations for the Blackhawks. Wow. What possessed him to do that? Well for one, his son Stan is the assistant GM. Having Bowman advising the staff there can only mean good things for this franchise, who has long toiled in mediocrity from management-down. The Hawks are back, baby!