Share All sharing options for: The Anaheim Mighty WhaleFowl 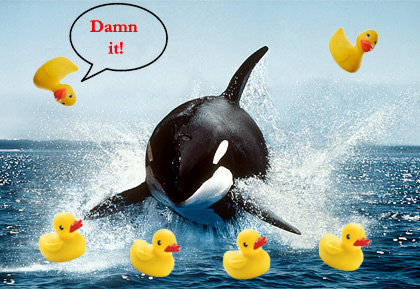 But when I read this small bit o' news yesterday that vaunted fourth liner Josh Green is joining Brendan Morrison and Brad May down in the Anaheim confines with former pitbosses Dave Nonis and Brian Burke, it struck me as GM business as usual. Not just because Nonis has hired Green previously but more because Nonis is the king (or the previously dethroned Pac West despot) for yanking players out of Europe or Russia and pulling them back to the NHL on "project" status because pulling the trigger on real trades is too scary unless you are dealing with Mike Keenan (which is even more regrettable for Anaheim since you just lost Keenan's BFF Bertuzzi).

This is all fine and good since I assume that's what Nonis is in Anaheim for. But if Burke loosens up the Nonis leash, be prepared for the following acquisitions to come your way Duck fans:

Jan Bulis - Currently playing for the Khimik Mytishchi of the Russian Super League, Jan was a top six winger stab-in-the-dark attempt by Nonis back in 2006. Bulis divided much of the fan base by the frequent vibe we got of him simply not giving a shit (12 goals on the season will do that) but he did have a decent post season, playing alongside Jannick Hansen for much of the Canucks/Ducks series. He also likes bikes. Enjoy with tempered restraint.

Tommi Santala - Currently playing for the Jokerit in the SM-liiga/Finnish league, Tommi was a waste of a fifth round pick for what was basically injury insurance or, as we knew it, "Vigneault is benching Linden for no reason" insurance. He played 30 games for the Canucks notching a Aaron Miller-esque one goal. So, yeah, you'll love him.

Marc Chouinard - Currently playing for the Fribourg-Gotteron in the Nationalliga A/Swiss Super League, Marc is better known as "opps we signed the wrong French Canadian from the Wild". He was tapped to be a huge face-off asset for us, but generally speaking ice time is required to showcase such a skill set. In 42 games with Vancouver, he doubled up Santala by scoring two goals before being waived in February 2007, going to Manitoba for the rest of the year and then being bought out.

Yannick Tremblay - One of the more interesting moves by Nonis, I believe Tremblay was signed during the lockout so he had to languish on the German Adler Mannheim team until 2006. Once he arrived though he played decent enough...for the Moose. He got called up sparingly, playing in just 12 games for the Canucks and netted himself three beautiful points, including a goal in his first Canuck game. I have no idea where he is now, so hiding underneath your couch and scrounging for crumbs is not out of the question.