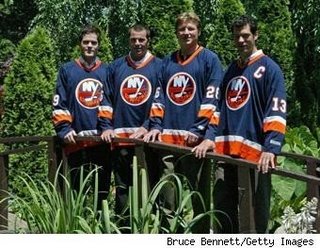 "Ted has helped us achieve some success over the last two seasons, however it has become clear that we have philosophical differences and have decided together to part ways," general manager Garth Snow said in a release. "Since last season and continuing into the summer, I have realized we do not share the same philosophies."

Philosophies. I bet Nolan must be thinking of one in particular, and that is that Garth Snow has not provided Nolan with any decent talent in the coach's 2 years at the helm. I mean, c'mon, Guerin, Fedotenko and Comrie were acquired last summer. Those 3 aren't going to get the Isles into the playoffs, or even put up a lot of points. And they didn't.
2 years ago the Isles snuck into the playoffs on the last game of the regular season with a team that looked like this. Quite the differencce. But the skill level of players on Long Island has gone south ever since. Take a look at who is signed for this coming season. Snow has a lot of work to do. Signing an aging Doug Weight to click once again with an aging Bill Guerin is hardly the right answer, Garth.

For a more in depth look at the Snow-Nolan relationship, check out this blog from a guy named Chris Botta, who worked 20 years in the Islanders' organization.