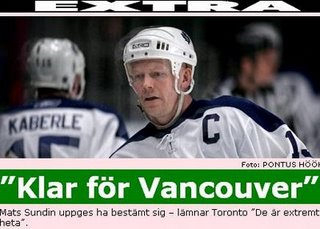 I don't know squat about this newspaper or its creds, but they posted a piece about Sundin today that I had to run through a translator. It reads as follows:

Rangers wanted to have him, Detroit likewise. Probably half NHL also. But according to information to today's news has Mats Sundin now certain himself traveled to extend his career, in an entirely other klubb. He leaves Toronto, the ice hockey's capital, where he been bigger than the town's mayors, for Vancouver, where he becomes law friend with among the other brothers Sedin.

A source to today's news says following about Sundins situation:

- his agent in North america thanked no to KHL (the the Russian boozing era gang) with the justification that he is entirely clear for Vancouver. That he has typed on, why would he say so otherwise. He sheep of course a big sum money at a possible overgång here, the source says.

- I spoke with Vancouver at the end yesterday (Friday) but that he would be clear is more than I know in that case, he says to DN direct from his vacation.

- I knew not even that he had taken beslutet to continue to play ice hockey, he continues.

How hot is Vancouver?
- they are extremely hot. They want to have him.

Mats Sundin is an of Swedish ice hockey bigest heroes over time. He has, along with Peter Forsberg, been the the biggest sign window for they blue and yellow during the last 15 years. Majority believed that he never would leave Toronto, where he was law captain in 13 years, and instead complete the career there. But the exclusive information that DN taken part of do now current that he continues his fantastic career, and that he does it in the Swede team Vancouver.

DN has in vain applied for Mats Sundin for a comment.

Haha, "Swede team Vancouver"??? Nice. I'll search more Swedish papers to see if there is anymore on this. No North American news sites are saying anything yet. So who really knows how much validity this article holds.
Hat tip to the folks at CDC for finding the article.

Another major Swedish paper, Aftonbladet has the same story up: "Sundin Ready for Vancouver" Mats Sundin is alleged to have decided - leaving Toronto "They (Canucks) are extremely hot."

Strange translation. But "hot" means "extremely interested" as mentioned above in the previous paper's translation.

Another link to a different Swedish paper can be found here. So what is being reported, basically, whether true or false, is that DN's sources are saying that Sundin's North American agent has kindly told the Russian Superleague that Sundin is not interested in playing there because he is ready to sign in Vancouver. Sundin's agent in Sweden, Claes Elefalk, said that he talked to the Canucks late Friday but he would not confirm that a deal has been completed. He told DN that he wasn't aware that Sundin was going to resume playing.
So what the hell? You can't believe everything you read, just yet. This deal is not done yet. But we do know they are having serious discussions, and Gillis is practically stalking poor Mats! Ha!

It didn't take too long for this rumor to get squashed. Sundin's rep Elefalk has gone on record saying that the article in DN is completely false. He apparently mentioned earlier this morning that Dusan Umicevic, a reporter from DN, had contacted him for a quote. Elefalk said the Sundin rumor was false yet DN published it anyway.
Well, I can't say I'm totally suprised. There was a lot of strange behaviour around the incident. Aftonbladet had the story up on their news site and then pulled it last night. Elefalk was not not aware that Sundin had decided to play even after the story broke out. You'd think he would know.
Ah well. Don't lose hope, folks. Mats could come to Van still. I just think that his agent's quote about when he would make a decision (late July at the earliest) still rings true no matter what we may hear in between.

Take this with a grain of salt as well, but Eklund may have a bit of a point here.

....here's why I feel we need to take note of the papers in Europe. They are on a pretty damn good streak right now.

Jagr was to Omsk, Straka to Czech, Demitra to Van, and others have all broken first on foreign papers, been denied by player or agent, and inevitably came to fruition.

I will say this: TSN is denying this and that is interesting, simply because every outlet has teams it is more tied-in with than others, and TSN has always had a beat on Vancouver. However, this is a new Vancouver regime...

For a Swedish paper to say that Mats to Vancouver is a done deal is actually really telling. This is not a small potatoes story over there. The agent's denial is a given, so I take nothing from that. The Swedes and Fins have their own little network. They all talk to each other, so this report is extremely curious.

-Sure, we're talking about a country as small as Sweden. You could fit more than 2 Swedens into British Columbia alone. People find out shit there. You don't have to go too far to find it.
-I also agree that the agent's denial is possibly a given. HArd to say though.
But we still won't get any official answers from Sundin for several weeks yet.