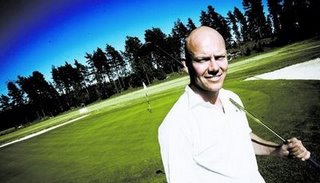 This was found and translated by a poster named Lugaid at the HF Boards:

There has been speculation about that you could be waiting until Autumn?

- No, I won't be doing that. If I decide to continue with hockey I'll make a decision in august, or maybe even in the end of this month. If I'm going to play it's gonna be the entire season, I want to be there from the beginning, when the training camp starts.

- Yes, it's flattering and a fantastic offer. It's nice that a club thinks I have that level of competence.

Does the money matter in a potential decision? You have enough, right?

- If you're a professional hockeyplayer, the money does play a part in the gathered picture for a decision. But there's alot of other factors that play in too. If it had only been about the money I would have signed with Vancouver.

Can you concider signing for the two years they offered? You have said earlier that you wanted to take one year at a time?

- Yes, but it's pretty rare to be offered a two-year contract at my age. I haven't even thought so far, but of course it's flattering.

Vancouver has said that it'd be an extra plus for you to play the 2010 olympics on home ice if you'd except their offer.

- I'm really not sure that I'll play another olympic tournament. You should never say never, but it feels very far away.

Is Toronto still an alternative?

- Nothing's out of the picture. I got a very good offer from them too as well as from Montreal. But Vancouvers contract was in a league of its own if seen to the money.

Toronto has been getting alot of new players and got rid of some others...

- I haven't been following closely, but Joe Nieuwendyk has entered club management and he's a fantastic leader and a real winner. I think he can help alot in the process of building a team strong enough to fight for the Stanley Cup in the future. I think they can get a good team already this year.
- And of course I feel alot for Toronto after thirteen seasons there. It feels like home. But we'll see. I haven't got as far as to thinking about teams yet.

Are you surprised about the enormous interest for you?

- Not sure about surprised. I was very happy with my season. And it's a nice recognition that so many have shown interest.

What is it that has kept you from a decision wether to continue playing or not?

- I want to feel like I can handle to recharge the batteries again for another long season and all that comes with it.

- Yeah, I've been kept away from long-term injuries fortunately. It's mostly small scale injuries that most players my age feel. My hip, a shoulder and a knee.

What are you doing right now?

- I'm just trying to enjoy the swedish summer. It's been pretty calm so far. I've been out to the swedish archipelago and up to Norrland for some fishing.

Earliest in a week Sundin will make a decision about continuation or not. With it will come the definitive answer to where - or if - he'll play next season.

(Link and pic from Aftonbladet article.)

So there you have it. Mum's the word for Sundin right now. He has left us with no angle or preference as to what he'll do. Do you really think he hasn't thought about where he is going to play? Not likely. When you're sitting out on a lake with the line out waiting for the big one, you're at peace. It's at times like that when you think about how awesome BC is compared to Quebec or Ontario, Mats. Ontario is suburbanite hell, you know that. Montreal is a kickass city and a great place to play. But there will be a ton of pressure there. You don't want to eat cheese for a living do you Mats? You don't want to be pressured to learn a 3rd language do you?
In BC, we are so laid back. We have the best pot in the world. We have superb mountainous scenery and some of the best fishing anywhere. Oh, and our team is better than those Easterners think. Sure, our 2008-09 schedule sucks, but the pot will take care of that!

Forgive my sarcasm. I am past the point of caring from a personal standpoint on where Sundin ends up. It is kind of fun reporting it though. That Swedish paper DN really created a shitstorm and increased his hits by millions I'm sure.
My opinion on where hMats plays and why has not swayed.