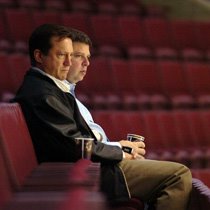 Speaking of jumping ship to a rival team: Steve Tambellini has left the Canucks as vice president and assistant GM and has joined the Oilers as their new GM. Kevin Lowe has been promoted to the position of president of the club. Haha. Yeah, may as well get Lowe out of the GM picture since he's good at making enemies!
Tambellini served with the Canucks for 17 seasons. He is obviously ready for the new opportunity and promotion.
Kevin Lowe was the Oilers GM for the past 8 seasons.
So let's see what Gillis does with the new vacancy. Maybe he wants full control of the Canucks ship. Not sure. Maybe it's time for the Steamer to get a promotion.

Best of luck out in the flatlands, Steve!