I used to have a $1200 non-digital camera with a $750 dollar lens on it. Whenever thunderstorms would come through the Valley, I'd buy 3 or 4 rolls of film and try my damndest to catch some bolts on film. It involved a good "trigger finger." Rarely did I catch any bolts on film unless it was dark out and I could hold the shutter open for several minutes.
Nowadays, I cheat. I use a digital camera and roll about 90 seconds of footage in video mode until lightning strikes. Then I freeze frame the "paused" moment and soup it up a bit on Photoshop a bit.
Ah yes, the old art of film and photography has been replaced by the Digital Age. Well, for me anyways. It's alot cheaper!
Below is the image. 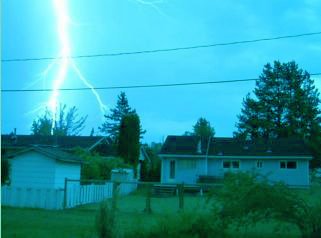