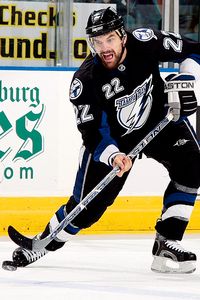 The Sharks are making all the right moves to pushing the team in to Cup position. Today they acquired defencemen Dan Boyle and Brad Lukowich from the Lightning in exchange for Matt Carle (he's pretty good too, and Tampa needed to clear cap space) as well as prospect Ty Wishart, a first round pick in 2009, and a 4th round pick in 2010. Keep in mind that sure, the Sabres let Brian Campbell go to free agency (and he recieved a deal worth over $7 million with the Hawks) and Boyle signed a 6-year deal last season that pays him $6.67 million per season.
On top of that, the Sharks signed UFA Rob Blake to a 1-year $5 million deal yesterday. While Blake had his worst points-per-game totals last year with the Kings, I think the 38 year-old can put up more points than that in San Jose because he's not playing with an atrocious Kings team anymore.

Boyle, Lukowich and Blake have all won Stanley Cups.

To give you an idea on how long it's been since the Sharks have had 1 or 2 serious offensive defencemen check out the scoring from their over the past several years:

So you see my point. It's been a long time coming since San Jose had a superstar defenceman, if ever. Suter was in the latter stages of his career in the early 2000's.

The Sharks have lost 2 D-men today in Matt Carle and now Craig Rivet, who along with the San Jose's seventh-round selection in the 2010 NHL Entry Draft has been traded to the Sabres in exchange for second-round selections in the 2009 and 2010 drafts.
So not only are the Sharks getting immediate help (because they need to win NOW), they are also securing their future with higher picks that they lost in the Boyle deal. Doug Wilson is somewhat of a genius. He just needs his team to go over the top this year, or his ass is on the line.

Not too bad, huh? You gotta love the goaltending and defence core. Solid.
A revamped and more offensive defensive unit combined with a new coach in Todd McClellan provides the Sharks with a new look and attitude. Yet one question remains...will Joe Thornton become a dominant player in the playoffs? 2 goals and 10 points in the playoffs in 13 games last season was not good enough.
It would also help if Cheechoo's stats stopped going down like the Titanic as well. The same can be said about Patrick Marleau.
Even when these guys are not going 100% you still gotta fear those Sharks. So just imagine how much better the team just got in the last 2 days.