Ray Emery toughs Landsberg's questions on Off The Record

Share All sharing options for: Ray Emery toughs Landsberg's questions on Off The Record 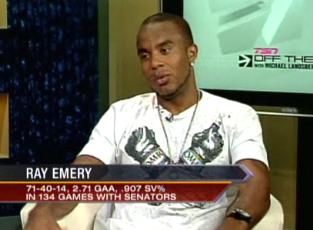 I managed to catch the special Off The Record today with Ray Emery as the guest. Michael Landsberg asked Emery some serious deep questions and tried hard to get some dirt on Emery and I thought the troubled netminder handled them pretty well. Here are the events of the show and what Emery said.

Landsberg started off by asking Emery "What went wrong?" Emery answered that the season started off tough and did some stupid things after returning from his wrist injury. The stupid things ampified his disappointment that he had lost his #1 job in net to Martin Gerber who Emery admitted was playing very well at the time.

Emery mentioned that he wanted to be traded out of Ottawa because he was "sick of not playing."

Landsberg repeatedly brought up Emery's tardiness for practices and Emery responded by saying that he "seriously has a hard time showing up on time."

When Landsberg dove into the fist fights Emery had with Brian McGratton, Emery grinned and said that the 2 of them had fought about 5 times before, and that he gets into fights with his friends all the time. Geez, I'd hate to be his friend!

Emery mentioned that it was never his intention to be a distraction by being late and fighting at practice, it's just that the media jumped all over it.

Ray kind of contradicted himself after that. Landsberg asked him if he would change anything about his life. Emery answered "no", but then mentioned that in hindsight he would have done things differently.

Emery then mentioned that he took some time away from the NHL and 'got away from things'. This helped him re-focus on his life, professionally and with his family and to get into shape. He "made himself a better person." He didn't get into any details though.

Landsberg asked Emery flat-out if he had a drug problem, to which Emery said "no."

Landsberg asked Emery if partying was a problem for him. Emery again replied "no."
He said he likes to go out and have fun but said he didn't go out on game nights.

Landsberg played the race card next, by asking Emery if it was tougher playing in the NHL because he is black. Emery said that he didn't think so. He said he was definitely more recognizable especially in white-dominated Ottawa.

Landsberg asked Ray "Why Russia?" Emery said that they "really went after me" and they were offering him better money. He said he would have made 1/10th of that in the NHL from what teams were offering.

Emery apologized to Senators fans for not establishing himself in Ottawa.

When asked what went wrong with the Sens down the stretch last season, Emery said that there was "insecurity" with the team. The Sens panicked down the stretch. They forgot what had gotten them to the Finals the previous year.

Landsberg asked Emery if Alfredsson was the right guy to be the captain of the Senators. Emery said that Alfie "is a great captain" and that he "steps up to support and guide the guys." Emery admitted that the Sens captain had sat down with him a couple of times and asked him what was going on. Emery admitted that Alfredsson "talked tough" to him about it.

When asked about the negatives about playing in Russia, Emery said that he has been told by players that the travel and living conditions were in question.

I couldn't keep up with the Next Question segment, but a few highlights from that were:

- Emery said Russian women on a scale of 1-10 are a 10.
- Emery's hummer is not coming with him to Russia
- A great perk about playing there is that he will have a bodyguard. Wow.
- The biggest thing he'll miss about Ottawa will be playing there on Saturday nights
- Emery will not miss the media craziness.
- He will miss Heatley and Spezza the most
- He dodged the player he will miss the least by saying "The Media"
- He didn't answer how many times he was pulled over by Ottawa police but mentioned that he had not been pulled over since the last time he was on OTR. Landsberg ate that one up.

Emery is still only 25 years old. Is he being sincere about turning his life around and changing his attitude? Perhaps. Time will tell. His deal with Atlant Mytishchi is only for one year, and then Emery said he will see what happens.
Sure, most teams avoided Emery like the plague this off season, but if Emery gets his life together, even though he'll always be a rebel, and has a great year in Russia, I don't see why an NHL team won't take a chance on him next summer.

There are some highlights of Emery on OTR found here at TSN.