That rug really tied the room together

Share All sharing options for: That rug really tied the room together 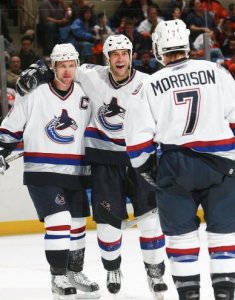 Via TSN, it's finally over. The slow death of the WCE took a few years but in the span of a few days all three have been sent to the respective corners of the globe. Sort of what happens when someone is drawn and quartered.

I come not to speak ill of the dead, but to praise what was the best line in hockey for a few years. I see no problem in recognizing the skill these three had nor being upfront with the fact that all three likely had their best seasons on this team playing on a single line and that really does not happen often (ever again?) for this club.

Some people will criticize that getting rid of all three of them didn't happen fast enough. To each their own. But all three remain in the top ten point producers in team history and to ignore that is absurd to me. We all share in common the wonder of what could have been if (a) Dan Cloutier and (b) Marc Crawford had been just a shade better at their jobs during the time these guys were peaking.

And I can't help but notice the final insult is where these three now call home. Personally, you can't get worse then the Rangers to me, but if you asked me to point at who comes close it would have to be the Flames (the rivalry has cooled a bit but they still loathe each other) and the Ducks would be close too for their Cup run last year. Ugh.

But I reiterate - their best years were here. We should be grateful. So, even though from here on out they're the enemy, I'll praise 'em one final time (besides, it's fun to reminisce of what having a first line felt like):

Bertuzzi
- Hat trick in MSG, the day Pavel Bure debuted for the Rangers, 2002. Note the picture in this post is from that game. [recap]