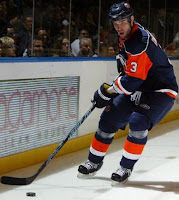 This is hardly anything to get excited about. Davison will be the guy on the outside looking in. He will make $560,000 this year.
A few things I noticed about Davison though are that he played 19 games for the lousy Islanders last season and he ended up at a -3. That would rank him 24th out of 30 skaters that suited for the Isles last year. He averaged just over 16 shifts per game and 13:51 of icetime in 34 games combined with the Sharks and Isles, but it looks like the Isles used him a heck of a lot more. He was logging about 20:00 per game there.
Not a guy that will put the puck in the net very often (3 goals in 195 career NHL games). Mike Weaver, who Davison is more or less replacing, has only scored 3 goals in 204 career NHL games. I was a fan of Weaver and wish he stayed. But I have not had many chances to watch Davison play. Given how the Canucks lose a lot of man-games by defencemen to injuries, I'd say we'll see Davison a few times this year.