Canucks' GM Mike Gillis was quite candid about his huge offer to Mats Sundin today. This from Canucks.com:

"We put a major offer together to try and attract who we felt was the best centre ice man on the market," said Gillis. "It’s an indication that we’re prepared to do what it takes to attract the best players here."Gillis has not heard back from Sundin's agent JP Barry yet.
"We don’t [have a timetable for an answer]. Mats has gone to bed in Sweden," said Gillis. "I know he’s thinking about things. From all indications he was very, very pleased that we stepped up and did what we did. We’re hoping to have some more dialogue in the morning and get a positive response."

Gillis then touched on what some of us commenters were talking about today, which would be that if Mats Sundin was is signed, it may make the Canucks a more attractive team to play for (in regards to say, Naslund).

"We have discussed that issue," said Gillis. "But again, until you have things executed and signed, it’s difficult to suggest what the next step will be."
I think we’ve gone a long way to indicating that we’re trying to get player in here who play at the highest level."

Screw the indications! Just get it done, man!
I guess we'll find out tomorrow. 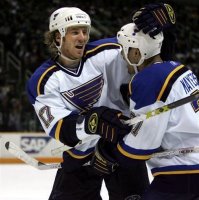 In the meantime, the Canucks have signed now-former St. Louis Blue Ryan Johnson to a 2-year $2.4 million deal.
The positives about Johnson (from Sportsnet):

Has blinding speed and is a tenacious forechecker. Likes to get physical and play an energy role. Can play either center or left wing

Lacks offensive flair and struggles to put points on the board. Needs to become a more reliable defensive forward in order to secure more ice time.

Ah fuck. Ring a bell? Johnson will probably replace Byron Ritchie on the 4th line. He scored 5 goals and 18 points in 79 games for the Blues last year. Yeah...Jeff Cowan the 2nd.