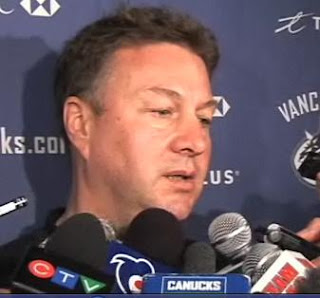 Canucks.com has 2 video segments from today's Mike Gillis press conference.
-Video 1 is more about the Demitra signing and some Sundin questions answered.
-Video 2 is about Rob Davison and what he brings plus a minor look into what Gillis has in store for the rest of the summer.

The press conference should make Canuck fans feel a bit more positive because:

- Gillis has seen and worked with Demitra for a long time and he is confident in his ability to play all 3 forward positions. Yes, Demitra is versatile.

- Gillis was not comfortable with the length of the contracts being offered up at July 1 and beyond and he didn't want to offer those players those long contracts because he wants to be able to secure the Canucks' core down the road. I suppose that's a fair statement.

- Gillis is still in contact with Sundin's agent on a consistent basis. He is trying to make the Canucks more competitive to sway Sundin's decision to play in Vancouver.

- Gillis believes that the Canucks are a more competitive team this year with all of the additions he has made. I guess if you think about it, Demitra replaces Naslund and could surpass Naslund's point totals from last year this coming season, especially if he stays healthy. Tack on the additions of Wellwood (to replace Morrison- again, Wellwood will need to remain healthy) and Steve Bernier and I guess we aren't in terrible shape. There's just a lot of question marks with those players that will be answered in the coming season.

- Gillis made it clear that he is only going to bring in players who have character and integrity.

- Gillis stated that he is currently telling Sundin and his agent that he is trying to get players that will complement "him". Once again, the sell factor for Sundin. Signing Demitra is an example of that, which Gillis stated.

- Notice what Gillis said when asked about whether or not Rob Davison was going to be the 7th or 8th defenceman? He said: "That depends on what happens in the next little bit." On paper, the Canucks currently have their top 6 set in stone. But just prior to that question, Gillis said that he will be exploring trade options later in the summer. You can read into Gillis' answer what you wish, but I think a defenceman may be traded in the next while for another forward, be that whether Sundin signs or not.
So, it's easy to hack Gillis right now as we wait for him to make "the big move", but at least he is standing in front of us giving what I believe to be honest answers with what he is trying to do this summer.
I admit that I just have to be more patient and at the same time trust Gillis. Hard to do isn't it?