Share All sharing options for: Mike Gillis is hoping the 2010 Games can lure Sundin to Vancouver 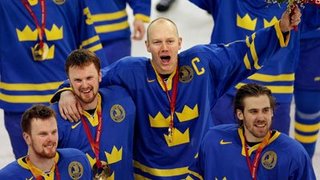 "What we have talked about is that if he (Sundin) were to play a couple more seasons, he would be the captain of the defending team in the Olympics in the town that he plays in, which we believe to be unprecedented, and may never be available to a player ever again." Gillis told the Team 1040 in Vancouver. "So we have talked about his captaincy of the Swedish Olympic team, but we haven't gone further than that at this point."

This was reported by Sportsnet. Mark Gage ironically had a piece on this concept yesterday.
So Gillis is going to do whatever it takes. You have to like his honesty. He isn't making anything secret, where other GM's may keep this stuff under their hat.
Personally, I don't really see the Olympics as a big deal to lure Mats here, even though we know Sundin loves playing for his country. No matter where he signs he will probably be in Vancouver anyway for one last crack to play for his country at that level. Just because he could be living a few blocks away for convenience really isn't a good selling factor to acquire his services is it?
Not really. It's almost grasping. But I don't care. I credit Gillis for continuing to put in a solid effort to get Sundin. He is going to fight this one right down to the wire it seems.
Thinking of this at a different perspective, if Sundin and the Swedes were successful, there would be Sundin, 2 Sedins, Edler, and possibly Ohlund on a Canucks team that could celebrate together and carry that enthusiasm into the Canucks' locker room. Food for thought. Then again, if the Swedes won, you'd have a Czech, Finn, Canadians and American telling them to STFU as well! Ha!