Share All sharing options for: Markus Naslund was thinking Rangers since July 1 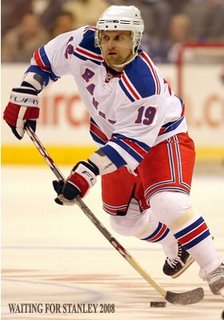 Thanks to GZ Expat for the link.

This from Swedish newspaper Sports Bladet:

"It's been my plan since July 1," says Näslund to newsday.com.

Henrik Lundqvist and the other Swedes may be joined by Markus Näslund. The Swedish veteran, who was free agent from last Tuesday, has written on a tvåårskontrakt with the Rangers.

-- "From July 1, I have had a focus on Rangers. It took a little longer than I had expected," says Näslund to newsday.com.

Näslund, who turns 35 on July 30, made four goals in twelve finals for the Vancouver Canucks. He has been lagkapten in eight years, but will now leave the club.

-- "I wanted to play for a team that has a chance at Stanley Cup," says Näslund.

-- "It seems that everyone who played for Rangers says that you only get a chance in life and that we must take it," says Markus Näslund to nhl.com.

This was translated by the Google translator, but you get the main drift. My question is: Has Naslund earned the right to leave Vancouver to play for a contender? No, in my opinion. He sure as hell couldn't lead US there.
What does this mean for the Canucks and Gillis is going to do next? Is he going to dump the team? Word had it that Gillis and Naslund had several discussions leading up to July 1 and after. Maybe this is an indication that Gillis is not going to substancially improve the team this summer. Roberto Luongo, who came here to be a part of a contending team, must be scratching his head, punching walls, or hearing it from his wife right now.
But who knows exactly what Gillis will do from this point. He still has options. I don't think there is a point to go into "sell" mode. Just sign a bunch of 2nd or 3rd liners and hope they click. It could be like the Buffalo team on 1999: a bunch of gritty guys, no superstar forward, but a superstar goalie.
Oooo, so everybody needs the chance to play for the Rangers, huh Nazzy? That really touches me deep inside.
But I'm not angry at Naslund. In a sense I don't blame him for leaving. Sure, our captain didn't go down with the potentially sinking Canucks ship and do the honorable thing. So he plays his last couple of years out in a "better" city on a better team. I just don't think he's earned the right to say that. Ray Bourque, yes. Markus Naslund, NO.
Nah, I'm ticked at Gillis. But who isn't.
I'd say "thanks for the memories, Markus," but I won't. Just haven't been a big fan of his since Bertuzzi left. I will say that he had some great hands and made some insane plays over his years here. This is probably the best Naslund tribute out there.

WHAT RANGERS FANS ARE SAYING

The former 48-goal, 104-point scorer has been in the 25-goal, 55-60 point neighborhood the past two seasons. He stands to benefit from playing with Scott Gomez, thriving in the presence of a playmaking center -- as a left winger, one can now envision a top line of Gomez centering Naslund and Nikolai Zherdev. He has hardly ever missed games in his career despite a 5'11-195 pound frame. He captained the Vancouver Canucks over the past eight years. He listed the presence of countryman Henrik Lundqvist as a selling point for placing New York at the top of his free agent list.


A commenter at Blueshirt Bulletin:

...what really concerns me is that we are even softer than last year if that is at all possible. Big problem.

Haha! Yes you are!

Rangers fan at the HF Boards:

Guys, please tell me I shouldn't be upset about the fact that we just signed Naslund, a soft, perimeter player who is way past his prime...and to a 2 year deal no less.

I think Naslund will be better than last years numbers, especially with a legit playmaker and maybe some young wheels to keep up with him (Zherdev).

I agree. Naslund playing in a place that he wants to be in, surrounded by that talent should improve his numbers. Then again, was he just disinterested in Van? He had plenty of chances to play with the skilled Sedins and didn't thrive with them. Whatever.