Lowe turns Coilers into Oilers within a couple of years

Share All sharing options for: Lowe turns Coilers into Oilers within a couple of years 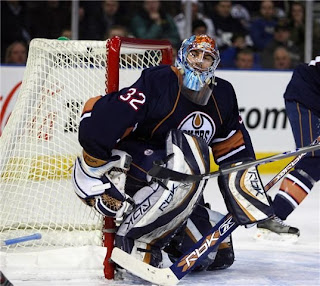 It wasn't that long ago that Lowe was letting Ryan Smyth go at a trade deadline to the dismay of Oil fans everywhere and grasping at RFA's like Dustin Penner and pissing off Brian Burke to no end. But sometimes all fans need is a little patience. The reconstructed Oilers team of last year missed the playoffs by only 3 points and suprised a lot of people. They lost impact players like Shawn Horcoff and mad man Ethan Moreau for huge parts of the season, while newbs like Sam Gagner (13 goals and 49 points), Andy Cogliano (18 goals and 45 points), Robert Nilsson (10 goals and 41 points) and Kyle Brodziak (14 goals and 31 points) all stepped up and contributed. These guys are only going to get better. The overpaid Dustin Penner ($4.25 per season for another 5 more seasons) managed 23 goals and 47 points. He is projected to exceed that you would hope.
I was fully in favor of the trading of Jarret Stool and Matt Greene to the Kings for Lubomir Visnovsky. Greene's size and aggressiveness will be lost, but now imagine Sheldon Souray AND Visnovsky running your power play. That is scary if you think about it. Visnovsky offsets the loss of Joni Pitkanen, who was traded to the Canes for Eric Cole. If Cole stays healthy, he will fit right in to the Oilers' structure. He's fast and tough. Great addition by Lowe. Cole recently stated that he views the Oilers as an opportunity.

"This is more about opportunity. There's going to be a tremendous opportunity for me to play with two tremendous hockey players, and that's not to say I wasn't in Carolina, but I'm looking to play a bigger role, more of a leadership role," said Cole.
"I'm going from a team where I was maybe in the middle of the road, maybe even one of the younger guys, to being the old goat in the room. I'm excited about everything."

I also liked the move of trading wide-eyed pain Raffi Torres to the Jackets for promising center Gilbert Brule. Brule tore it up with the Vancouver Giants several years ago but has not found his scoring touch at the NHL level yet. In 146 NHL games, Brule only has 12 goals and 32 points. He's only 21 years old. Maybe the run and gun style of the Oilers will change that.
Torres' numbers have dropped over the past few years, so this is a worthy gamble.

So, this is their depth chart. Check out the Oiler's current roster.

Doesn't Oilers' goalie Garon look like Luongo in stature? Except he's better in shootouts than Louie is. The 6'2 207 pounder played in 46 games last year, had a 2.66 goals against average, .910 save percentage and 26 wins on a non-defensive team. Roloson's numbers were less stellar, at 43 games played, a 3.05 GAA, a .90 save % and 15 wins. Garon is a force to be reckoned with at this point.
And so is the team. They can come at you effectively with all 4 lines and should get contributions from all 4. That is going to make them even more of a pain in the ass to play against in 2008-09. A playoff spot really isn't out of the question for these guys, and I can respect Lowe's abilities to recreate this team the way he has.
Judging by how much cap space Lowe has left, I believe he is about done adding to this team.

So are they better than Vancouver right now? Debatably no, in my opinion. Close call though. Vancouver still has a premier goaltender and a stacked defence. The Oilers can run and gun all they want but I think tight defence will win more than not.