"…and on the fifth day, Gillis lusted for a center"

Share All sharing options for: "…and on the fifth day, Gillis lusted for a center"

7:05 PM ET Update: Via Kukla: Cooke is a Penguin. Good for him; like Ruutu I applaud ex-Canucks who get solid chances on other teams when our management or coach messes it up for them here. Just another reason to look angerily at Vigneault, but maybe that's just me...

6:36 PM ET Update: A slow day obviously, but I caught this on Sportsnet and thought it was mildly important. The following have filed for arbitration prior to tomorrow's deadline:

I checked with Alanah over at Kukla regarding if a player goes to arbitration if that negates a RFA offer from another club. We're not positive yet, but I'll wager a guess that it does so that should put the Filppula and Vermette rumors to rest unless their respective clubs walk away from the decision. If I am wrong, let me know and I'd be happy to make the update. [I just noticed the caption of the photo on Sportsnet - "Ottawa avoided the offer sheet scenario with Antoine Vermette when he filed for arbitration." - which would suggest my hunch was right.]

And of those who haven't filed yet - Clowe, O'Sullivan, Umberger, Meszaros and Bernier amongst others - the window for arbitration closes tomorrow at 5:00 PM ET.

12:30 PM ET Update: Via Russo Rants (h/t Kukla): More Morrison to the Wild talk. Morrison is suppose to make his call on Monday. It'd be nice to have him not select a team in the division but whatever. Moving on...

12:00 PM ET Update: Thanks to Five Hole Fanatics, there's some statistical research for 2008 from HockeyAnalytics.com. I don't know who Alan Ryder is honestly, but his attempt to extract value from numbers sounds right up Gillis's professed alley of general management so I thought it was worth looking at. I'll share the best part: Vancouver takes the prize as being the "unluckiest" team in the league for marginal goals in both conventional skating time and the shootout (p.6-7). Welcome to the party Bernier.

At any rate, Ryder's article has a lot of other points (including plenty of good on Luongo) though skimming though the comments over at FHF would suggest taking it all with a grain of salt. Even if Ryder's approach is questionable, showing statistical proof that Vancouver was the unluckiest team in the league is just more icing on the cake.

8:00 AM ET Update: Via the Sun [.mp3] - Check in on Gillis's comments yesterday regarding Bernier, Sundin and the departure of Naslund.

Via the Sun: Elliot Pap explains why not to jump into panic mode...yet.

Via the Sun: A bit more on Bernier being the newest winger.

Via the Sun: Gillis talked to Sundin one-on-one as recently as Thursday and feels very much still in the race.

Via GlobeSports: As the villagers encircle him with torches and pitchforks, Gillis pleads for calm.

Via TSN: The hate still flows strong with Lowe and Burke. Just lock them in a room with steak knives and the winner get a second rounder from the other team. Deal?

Via the Tampa Tribune: Tampa made a deal that Boyle couldn't refuse: "We'll put ya on waivers if we have to tubby."

Via the NHL Forecaster: In case you blinked and missed it, ol' buddy Fedor Fedorov has signed on with the Devils and Josef Vasicek is Russia-bound. 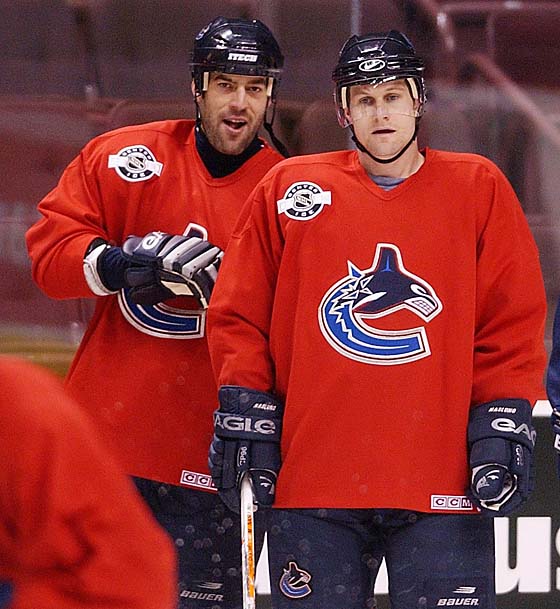 "Mark, you ever heard that song 'These are the days of our life'? Hahaha, fuck Queen, we rule."