"..and on the third day, Mike Gillis decided life was better as an agent"

Share All sharing options for: "..and on the third day, Mike Gillis decided life was better as an agent"

In case anyone forgets the BEST part of all of this? MIKE GILLIS LOWBALLED HIS OWN FORMER EMPLOYEE. And with that, he left to go a bit closer to home to a team with zero travel issues and plenty of offense.

Excuse me, I'll be at the bar. Underneath it actually. Maybe through it...

Boyle is rumored to be on the move shortly.

1:55 PM ET Update - Via TSN: Pens strike fast: add Satan (SAAAAAAAAATAN) and Fedotenko as wingers shortly after sealing the deal on an extension for 7 years, $35 million with Fleury.

If MAF is getting $5 million now and assuming Luongo's level of play stays where it is (or gets better) and he's at $7.5 million now, then he'll be in the high 8's to mid-9 million range in two years easy.

1:17 PM ET Update - Via TSN: The Leafs land Mikhail Grabovski from the Canadiens for the rights to Greg Pateryn and a second-round pick in the 2010 draft.

10:47 AM ET Update - Via Kukla: The Caps ink Keith Aucoin to a two year deal. Aucoin had been playing on and off for the Hurricanes for a few years.

Via The Ottawa Sun: The Canucks are one of the few rumored teams who are getting ready to target Antoine Vermette and Andrej Meszaros, both RFA's. Then again we are talking about Garrioch so be accordingly skeptical.

9:08 AM ET Update - Updated the trusty chart below. I know the fourth line is messed up since I am keeping Cowan on the wing though he is most likely on his way out. Wellwood doesn't move into the top six without earning it. I'm bumping Shannon to the third line from Manitoba since he (or Hansen?) has the best chance of moving up. Anyway you slice it, it ain't pretty: 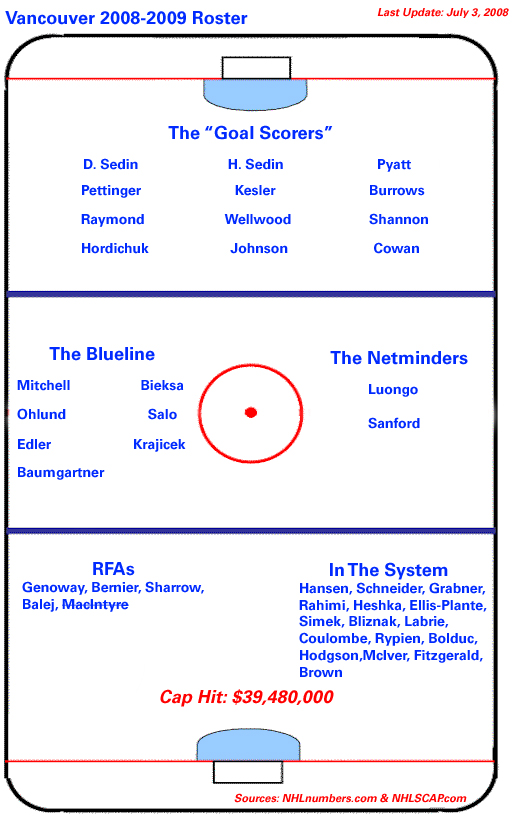 6:08 AM ET Update - The other shoe is going to drop today as we'll see our plan B guys hightail it out of town:

Via Russo's Rants: The Wild have offers to Naslund & Morrison and float the idea of getting Bertuzzi as well. If that's true, Canucks just need to forfeit for an entire year and save everyone the pain.

Via the Post Gazette: Pittsburgh is going come running with fist fulls of cash and a Crosby sweater at Naslund.

Via the New York Post: Larry Brooks, as expected, is upset about Avery. Also notes that the Rags - who he says needs scoring still? - will be after Naslund as well.

Via Puck-rakers: Morrison is out of the running in Ohio.

Via Lowetide: A fair look at Gillis from the words of one of the best Edmonton bloggers. Complete with silly young picture of Mike.

Via TSN: A quick reminder that Burke still hates Lowe.

6:08 AM ET Update - The Vancouver papers are low key this morning. And no Ed Willes? After his hack article yesterday? I'm shocked:

Via the Province: Ryan Johnson is "excited" to be on a team where he'll be lining up with Hordichuk on the fourth line. I have no doubt he'll be a decent addition to the team; if nothing else, our fourth line will see a great deal of work this coming year.

Via the Province: You think the Sundin offer is bad and the Canucks are one of the worst run franchises in the history of sports? You're not alone.

Via the Province: ...so now Gillis, on bended knee, has to beg Morrison and Naslund to return at reduced prices to keep this team afloat. Naslund already has an offer on the table from at least the Wild (interested in seeing our franchise scoring leader in that uniform eight times a year?) but Morrison could be out of the Blue Jacket's plans with their signing of Huselius.

Via the Province: Gallagher decides it's too easy to rip into the Canucks so he target's the Hossa signing:

Hossa has decided to step into Detroit for one fun-filled season, pick up his ring, and then go for the big financial score the following season when some poor team will lay out a huge wad of cash for some guy who's already invited himself to the championship dance by joining a team that may well have got there whether he'd been involved or not. How motivated will he be for that poor team?


Via the Province: Sanford is excited to come back, saying comfort and a close working relationship with Luongo was key. Brothers in misery.

Via the Sun: A quick recap of all the guys added yesterday.

Via the Sun: MacIntyre says what we all know: Sundin backfired and now Gillis has to make something out of nothing. GM's are "sneering" at his offers, leaving the RFA route as the last option. But he has to be careful with RFA's since we don't want to lose the first round pick next year since it will no doubt be quite high. 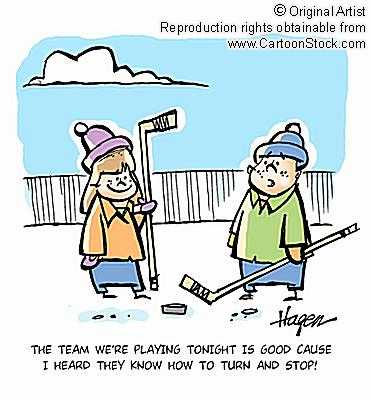 Keeping score at home? Here's what our fearless general manager decided were some more pieces missing from the puzzle that would get them to the promised land: Nolan Baumgartner, Alexandre Bolduc, Curtis Sanford and Ryan Johnson. Add Darcy Hordichuk and Kyle Wellwood to the gig and we're shaping up to be a mediocre AHL team with the exception of the starting netminder.

Stare at that list of names and what stands out? How about this: Hordichuk will lead the league in PIMs because he is going to get plenty of ice time after the Canucks get blown out early in games and his ice time (to send 'a message') increases?

Or maybe what you see (as the saying has become bouncing around blogs and forums) is the best collection of third and fourth liners in the league. Hordichuk replaces Cowan? OK. Johnson replaces Ritchie? Sure, what the hell? I'm glad that Johnson is good at the PK and shot blocks because he'll get plenty of practice.

At this point Gillis has yet to replace Isbister much less fill the holes in on the first line. To that end, is Wellwood shaping up as some sort of upgrade to Morrison?

Perhaps what you really see is no semblance of a team that can survive 82 games in the NHL. And it's not the players fault: it's Master and Commander Mike Gillis who is failing in plain view of everyone on top of being the first GM to try the RFA route (and fail); collectively it's a low that, even as a Canuck fan, I'm shocked by.

There's still plenty of time to get some quality guys on this team before Gillis has no other options then to move Edler or Bieksa. But with Hossa out and Jagr and Sundin waiting around, guess who's going to get a lot of attention? Naslund. Guess who else? Morrison. Guess what "lock to end up in Vancouver" will too? Demitra.

A lot of the remaining options, even if not desirable, won't last long. At this point bringing Bertuzzi back would be a slight win for Gillis and he was bought out only days ago. Swish that around in your head for a second.