The joys of being stuck with Bryan McCabe

Share All sharing options for: The joys of being stuck with Bryan McCabe 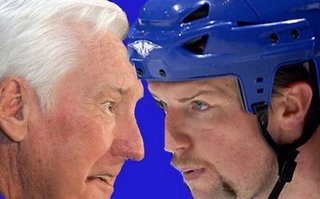 No love for Bryan McCabe in Leafland.... well maybe a little. But the general consensus is that the Leafs need to move on from this guy. Only question is: how? It is going to cost Cliff Fletcher two-thirds of McCabe's contract (at $6.15 million by the way) to get rid of the overpaid inconsistent d-man. That would be a costly $4.12 million I believe. Fletcher doesn't seem to want to do that, according to today's Toronto Sun. Well Cliff, you may just have to suck it up and pay for the sins of the GM before you. He may have to try move the $5 million-man Pavel Kubina instead. But even Kubina has a no-trade clause in his contract.
If, and a big IF Sundin decides to play for the Leafs, his potential $7-8 million contract will eat up all that is left of the Leafs' salary expenditures. I can't see Cliff doing that without moving either Kubina or McCabe.
Something has got to give. Sitting McCabe is not an option though, as the NHLPA will eat Fletcher for dinner if he does that. I don't see Fletch going that evil route anyway.
I guess it becomes a balancing act. Is it worth buying out McCabe for that much dough or is the GM better off just keeping him and hoping he can turn his career around and be more consistent and worth his value? It looks like Cliff has chosen option #1. But who in their right mind will take on McCabe now via trade route? Would you? I wouldn't touch the dude with a 20 foot pole.
The following was written in late June by a Toronto newspaper:
Former general manager John Ferguson signed McCabe to a five-year, $28.75-million US contract after the defenceman scored a career-high 19 goals and 68 points in 2005-06. But the 33-year-old, who represented Canada in the 2006 Olympics, has since failed to replicate those offensive numbers, which helped cushion some of his defensive liabilities.
McCabe scored 15 goals in 2006-07 and managed only five in 54 games last season. He also tied for third in the league with 104 giveaways two years ago. That did not include the time he accidentally scored a game-winning goal on his own net last October.Yeah, no love for McCabe. He must have a brass set on him, because if he doesn't leave town, he is going to subject himself to the jeers of the Leaf faithful and media. Maybe he is taking that possibility as a challenge to redeem himself and shut everybody up. Making last year's injury-plagued year as an exception and seeing his stats in the previous years, he may just silence his critics. But I think the article above makes it clear of what is McCabe's biggest problem: defensive liabilities. And the 33-year old has been making those for most of his NHL career.