Share All sharing options for: Jagr signs in Russia 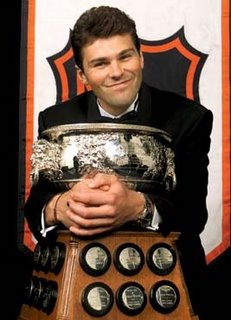 From Naslund-bashing to Jagr-bashing. It has been confirmed now that the Russian team Avangard Omsk has signed Jagr to a 2-year deal. No dollar figures yet, but I would guess it's $10 million per season, given the Malkin situation of recent past. Jagr played for Omsk during the last NHL lockout.
It does not bother me one bit that Jagr is leaving. When motivated, Jagr could be the top player in the game. When lack of motivation set in, you just wanted to shoot the guy.
My biggest memory of Jagr is a sour one. When the Penguins played the Rangers at MSG in what was Wayne Gretzky's final game, it was Jagr that scored the tying goal and the OT winner and threw a bit of a dagger at the festivities. The move he pulled was spectacular. That wasn't the sour part. No, the sour part is what Gretzky said to Jagr in the post game handshake and how Jagr handled it. The Great One "passed the torch" to Jagr and it was convenient at the time, because Jagr had spoiled the party temporarily with the OT goal.
But Jagr didn't really accept the torch. He looked uncomfortable about it when asked about it. I remember it. He didn't want the recognition or maybe even the attention.
And despite 2 awesome years for Jagr after that "passing", including an Art Ross trophy in 2001, Jagr went into decline when signed by the Capitals. That's when the bad Jagr came out, and his 3 years in Washington were a waste. "Spoiled", "Unmotivated", just a couple of words that were constantly used about him. Definitely not the right guy for Gretzky to be passing the hockey superstar torch to. One commentor at the NY Post.com blogs said it right:

Jaromir Jagr is listed at 6'2" / 240. Had he any heart, he could be Wayne Gretzky, Mario Lemieux, Mark Messier and Bob Probert all wrapped up in one. He's a massive individual with ungodly puck skills, but seems devoid of any work ethic or passion. Imagine someone as big and as talented as Jagr willing to play tough. It would be an awesome sight. But Jagr, at times, plays more like a 80 lb. ballerina in a big man's body.


Despite 3 good recent seasons, where Jagr has looked motivated several times in the Big Apple, I don't care. Goodbye and good riddance. I don't like players that act like 3-year old kids, I don't care how talented they are.
But to end this piece on a positive note... I don't know if have seen any player who was that hard to take the puck away from. Sickening. Jagr was big and strong with perfect hands....when motivated, and a treat to watch.

-Some good Jagr humor in this clip.

Jagr wore the number 68 on his uniform in remembrance of the Soviet invasion of Czechoslovakia in 1968..