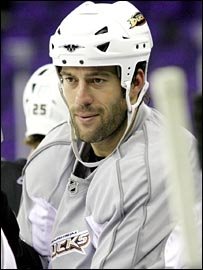 Just when you think Bertuzzi's NHL career has winded down he finds a new home. Now Canucks fans are going to see Bertuzzi a lot more, as the Flames have signed him to a 1-year $1.95 million deal.

"Todd is a proven scorer with the ability to play both wings," Flames GM Darryl Sutter said today. "He expressed to us that he wanted to play in Canada and that desire along with signing him to a one-year deal was important to our philosophy. He wanted to play on a good team and it fit our money. Additionally, our captain, Jarome Iginla, was a strong supporter of Todd and wanted him on our team."

Wow, Iginla wanted Bertuzzi in Calgary.
Fans and teams alike are waiting for Bertuzzi to regain his old superstar status that he had shown in Vancouver from 2001-2003. Big Bert lost his edge after the infamous Steve Moore incident and never regained his form. Some of that can be attributed to major injuries, like his back for example, which kept him out of action for almost all of the 2006-07 season, where he played for both the Panthers and the Red Wings.
Brian Burke took a chance on the him last season in Anaheim, but the big guy only managed 14 goals and 40 points in 68 games during the regular season and only 2 assists in 6 playoff games. Which Bertuzzi will show up in Calgary? Hopefully the mediocre one, as they are our enemy. Are Canucks fans going to boo or cheer him every time he plays against us? Should be interesting. Iginla is a great player to align yourself with, so we could see a resurgence.

"I gotta to say, Jarome is 100 per cent why I'm a Calgary Flame," said Bertuzzi. "I had great talks with him. Everything he said about the organization and the city was nothing but positive. Haven't talked to my family, we decided it was a good opportunity for us and we couldn't pass it by."


Bertuzzi is an upgrade from Owen Nolan in a sense. He had more points per game than Nolan did, plus he's cheaper, as Nolan signed in Minnesota for 2 years at $2.75 million per season. I just think Bert tends to float too much, where Nolan was in your face all the time.