Share All sharing options for: Dan Hinote and Amy McCarthy wed on Saturday 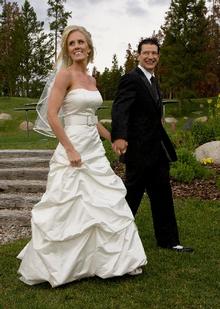 The wedding pic is from the Rocky Mountain News, as is the following:

The wedding party of 10 groomsmen and 10 bridesmaids wore traditional garb for the ceremony, but the guests were asked to show up in their favorite '50s costumes, which would explain the dead celebs who attended the wedding.

Castro, in full military garb and a fake beard, was among the last guests to arrive, which seemed a bit odd because he had a reserved front-row seat on the bride's side. After the nuptials, Mr. On the Town spotted Castro walking arm-in-arm with the bride's sister, actress Jenny McCarthy, out to the parking lot.

Was it? Could it have been? Yup, superstar Jim Carrey, Jenny's beau, slipped in and out of the ceremony almost undetected except when Jenny's 5-year-old son, Evan, started getting spooked by the get-up. "It's me, Jimmy," I was told that Carrey said while pulling down his beard to soothe the troubled young 'un.

During the dinner, the groom addressed his friends, family and fans. "It's been a wonderful day for my beautiful bride and me," he said. "You must be a bunch of screwed up people to dress up like the '50s, right? I have a teammate dressed as a woman."

Peter Forsberg was a groomsman and apparently walked up the aisle with bridesmaid Jenny McCarthy. He managed to stay healthy for the entire wedding.
No pictures of the 50's style reception yet.
The only reason why this story is big news is that

1. There really wasn't much else going on in the NHL this weekend.
2. Amy McCarthy was a Playboy Playmate I believe in 2005 and is the sister of Jenny McCarthy.
3. The 50's style thingy is cool and must have been a blast.
4. Blah blah blah don't really care. I just hate slow news days. It's just that now you are "in the know": A super-celebrity franchise-hockey player married a frisky blonde who has a great personality.

The picture below is from Popsugar.com: 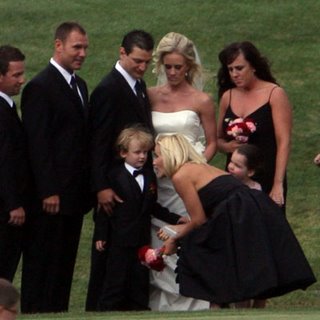