Share All sharing options for: Canucks trade picks to get Steve Bernier 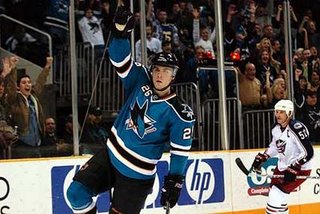 Mike Gillis is no doubt desperately seeking offence now after the Sundin deal fell through. Today, he made a pretty decent move by acquiring RFA Steve Bernier from the Sabres in exchange for 3rdd round pick in 2009 and a 2nd round pick in 2010.

"Steve Bernier is a highly regarded young player who's enjoyed success early in his career," said Canucks GM Mike Gillis. "With his right-handed shot he will be a great addition to our top six forward group and an asset to our power play."

It's true. Bernier will be a top 6 forward. But Gillis will have to sign Bernier yet. He made $850,000 last season and will get a raise.
Has Gillis redeemed himself a little with this trade? Yes. But he's starting to give away top draft picks to get guys right now, and I wonder if that is wise. But remember, he's desperate!
I have been a big fan of Bernier's since he started his NHL career in San Jose in 2005-06. In that season he scored 14 goals and 27 points in 39 games. He has 45 goals and 90 points in 177 NHL games.
Big thing? He's a right winger! Oh my gad, we finally got a right winger. He could click super-well with the Sedins, much like right-winger Anson Carter did. We'll see. Bernier has tremendous upside, and given that he is going to get more playing time, he should excel here. He only averaged 13:20 of icetime last season. Give him an extra 5:00 per game and his production will go up. He will have to earn that under Alain Vigneault though.
For the record, Bernier is about 6 feet 2 inches and 225 pounds. He can hit pretty damned hard as well as score.

Concerns: He's streaky. In San Jose, he was a second line winger playing with Marleau. You'd think he would have put up more points on a consistent basis.

Said Bernier of the trade:

"When I got the call, I was shocked because I thought everything was going well and I don't think there were any issues with how the contract was going," said Bernier.

"But right now the only thing I'm thinking about is getting in shape and having a chance to improve myself with the Canucks.

"I got traded in February [from San Jose] and thought I was going to stay there [Buffalo] for a little while. But it's part of the job and I'm going to Vancouver and it's tough not to be happy.

"I'm very confident of what's going to happen next year."

Source: The Province.
So, you are going to score 25-30 goals then? Bernier could actually do just that.

-Welcome to Buffalo Steve Bernier! A great first night as a Sabre for Bernier. 3 points.