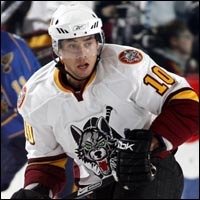 I haven't heard any dollar figures or terms for this signing yet.

-Born in Fernie, BC
-32 years old
-5'11" 191 pounds.
-it appears that he wasn't drafted.
-lives out of a suitcase. Krog has played for Islanders, Ducks, Thrashers, Rangers and now the Canucks.
-since he busted out of the NCAA in 1999, Krog has only played 198 NHL games, scoring 21 goals and 58 points.-Krog's best season was with the Mighty Ducks in 2002-03, where he played 67 games and scored 10 goals and 25 points. He played 21 games with the miracle Ducks team that season that went 7 games into the Stanley Cup Finals. He had 4 points.
-Krog excels at the AHL level. Last season with the Chicago Wolves he scored 39 goals and 112 points in 80 games. In the playoffs, he scored 10 goals and 36 points in 24 games. In 303 games played with several teams in the AHL, Krog has scored 127 goals and 362 points. Impressive. He won the Hobey Baker Award in 1999 as the Top U.S. collegiate player. But why can't his production translate into the NHL?
When asked in May about why he couldn't crack the Thrashers' lineup even though he was having a masterful season with the Wolves Krog replied:

"There are a lot of reasons why," Krog told Tim Wharnsby of the Globe and Mail. "Drafted players get more opportunity. There are so many guys who are good enough to play in the NHL who aren't playing there."

Anderson then mentioned that Krog would have to accept a role a checker on an NHL team and then possibly crack the top 6 if injuries ensued.

"I know with Rob (Brown), he figured it out that it was better to have a smaller NHL paycheque than a minor-league cheque," Anderson said. "Jason has to figure that out, too. The other thing he needs is a coach in the NHL who believes in him."


Check out the rest of the Globe and Mail article on Krog here.
So it looks as though Krog will be a member of the Moose and await his chance at a spot on the Nucks. If what John Anderson is saying is true, then Krog will fit right into Alain Vigneault's structure, if Krog is willing.
At the same time, Alanah from Canucks and Beyond is mentioning that Krog's contract is a one-way deal.

More of Krog's accomplishments at the AHL, European and NCAA levels can be found here at Wikipedia.

-Krog scores a goal against the Marlies that keeps his streak alive. Listen to what the play-by-play guys say about him in the background.
-Ben Eager shows Krog to his bench while Krog played for the Rangers.