Share All sharing options for: Antoine Vermette to Canucks? 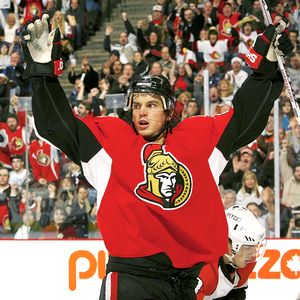 I am just posting this because Eklund isn't the only person speculating about this possible trade. Gillis may make a deal like this whether he lands Sundin or not, and I say: "go for it!"

Vermette is getting nowhere with the Senators as far as a contract goes. But he sure as hell improved his offence in his contract year. 81 games played, 24 goals, 53 points, 4 power play goals, 3 shorthanded goals, and played an average of 17:35 per game. As you can see here, his icetime and stats have gone up ever since 2003 when he started in the NHL.

Question is, which defenceman is Gillis going to surrender, Bieksa? He has 3 years left on his contract that pays him $4.25 million this coming season, and $3.5 per season the following 2 years. Ohlund? He will be playing in the final year of his contract that pays him $3.5 million per season. I'm sure a raise is coming there. Like a friend of mine said, defencemen are getting paid so much damned money in the offseason as free agents, that Ohlund could demand $6 million-plus. Sucky. Adiose.
We'll see. Krajicek has 1 year left on his contract as well.
Gillis has already hinted a couple weeks ago at a possible trade to acquire a top 6 forward. It's just a matter of time.