.....and screw the Canadiens too

Share All sharing options for: .....and screw the Canadiens too 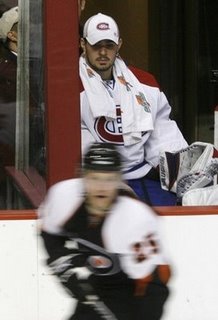 The previous post was written with some spiced rum in my veins. Today I stand by my opinion. Here is another example of something said that bugs me, and unfortunately it comes from my fave online analyst Spector.

As I've said before, if it all about the money, (Mats Sundin) will sign with Vancouver. If it's about familiarity, he'll return to the Maple Leafs. If it's about playing for a potential Cup contender, he'll sign with Montreal. Those are the only teams who appear to have a legitimate shot at signing him.

That statement in itself is slanderous to a Canucks team that really isn't that bad. I've already ranted about the new forwards we have and their potential. Now what team in the League wouldn't want the goaltender and depth on defence that Vancouver has? It's awesome to say the least.
The Canucks are not dead. They have a chance to make some noise with one of the best goalies in the world, the deep defence core and revived offence.
All this talk about the Canadiens being a serious contender revolves around one thing in particular: Carey Price. What I saw late last season was Canadiens management giving the young Price the vote of confidence by trading away Huet at the deadline. And what happened to Price in the playoffs? Well let's just say it was not very Cam Ward-like from the Hurricanes' Cup run a couple years ago. Will Price become the consistent #1 guy? Pressure's on, kid.