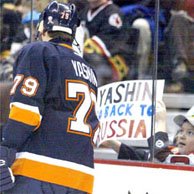 Is there a chance that Alexei Yashin could return with the Islanders next season?

"We've had discussions," Yashin's agent Marc Gandler told Newsday. "But it's been very slow because I told them in the beginning how much I wanted. They're obviously not happy about that. But clearly, they missed him. They didn't have a first line last season."

Excuse me while I clean up the stinky mess I just made on the floor. The Islanders are still paying $2.2 million towards their cap for 8 years total in order to continue the buyout process of Yashin's ludicrous deal made several years ago.
The fuel behind this silly story is that the Islanders did not get much offence last year. It's true, they didn't. But did anyone think that Mike Comrie, Bill Guerin and Ruslan Fedotenko were going to be the Lords of Long Island? The were only going to "chip in", which they did.
If Hockey Analysis is correct, the only player of the 3 that is locked up for another season is Bill Guerin, at $4.5 million per season. So where is all the scoring going to come from this year? Not liking the UFA market for any means of serious help.
Hey, the Canucks are facing the same issue. So let's get Mogilny back, right? Wrong. Yashin is a gutless puke who only plays with any form of desire whenever he feels like it. In my opinion, Islanders management needs to move on from that gong show and just accept the fact that they fucked up royally with Yashin in signing him for so long. In the meantime, they need to grow from within. They have room to throw some dollars at restricted free agents, but I wouldn't be trading away the farm for immediate help if I was a Wang. Take the hit for the next few years and hope for some overachievment and better performances from some guys.
It really wouldn't hurt if guys like The Prince of Darkness Miro Satan (80 games played, 16 goals and 41 points) and Trent Hunter (82 games played, 12 goals and 41 points) chipped in a lot more. But those 2 are about to become UFA's as well.
Geez, tough times on the Island. It may be another tough year.
It's just that bringing back Yashin would only further prove to Islander fans that the team they cheer for is a joke. Especially if they pay the guy the amount his agent is asking for.