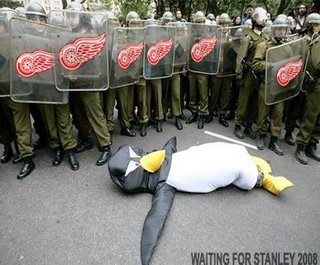 I should give up predicting in this series because I've been wrong too often. But how can you not bet on Detroit winning tonight, given the way they have dominated the Penguins in the shots and goals category? Answer: Marc-Andre Fleury.
Given that Detroit is far more composed and experienced and it has shown all series long, you'd have to think that the goals and shots trend will continue. Is Fleury up for some more magic? Possibly. But I've said it over and over again, the Wings have to shoot high on him. He is weak up top. The best Fleury saves in Game 5 were along the ice. Same old same old. He's been stopping a vast amount of those shots all series long. Shoot some pucks at his head and see what happens!
How much momentum will Pittsburgh have after that robbery of a win in Game 5? Add home ice advantage to that and they should put up a good fight.
Detroit just has to keep playing the way they were playing. One mistake and one unlucky bounce cost them to lose their lead with only seconds left last game. Zetterberg should have shot the puck in deep when he had it at center ice, but he turned it over. Once the Pens charged into the Wings' zone, Franzen got control of the puck and tried to clear it high off the glass. Unfortunately, a Penguin player tapped his stick and the Mule didn't get enough on it. Turnover, and badda bibg badda boom Talbot bags the tying goal with the Cup probably on it's way to ice level. A real stunner of a game.
Several Wings tired after the long Game 5. Is there a factor there? The best thing they can do tonight is score first and not give up the first 2 goals. They gotta shut those loud Pens fans up early and zap the energy out of the arena and the home team. I think they will do that. They have to be pissed after Game 5. They should have won that game. They know they are better than Pittsburgh.
Chris Osgood has to be better as well. I think he will rebound.
So what is my prediction? 3-1 Wings. Let's get this over with. The closer Crosby and Lemieux get to a Cup the angrier I get.

"I think being on the road is a great thing," Babcock said. "We've closed out every series on the road. As far as carry over from (almost winning Game 5) that, it's a lesson learned. They're good players. It won't happen again. Sometimes you need to be reminded."