Who are defencemen #7 and #8 in Vancouver?

Share All sharing options for: Who are defencemen #7 and #8 in Vancouver? 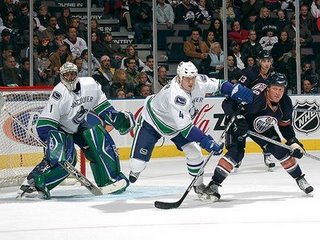 Willie Mitchell, Mattias Ohlund, Sami Salo, Lukas Krajicek, Kevin Bieksa and Alex Edler. They are the Canucks' top 6 defencemen. Unfortunately, a few of these guys just can't stay healthy. So who will be on call just in case?
It looks as though the Canucks are not going to be making any offers to Aaron Miller or Mike Weaver. Miller made $1.5 million last year and Mike Weaver pulled in $600,000. Why not throw a few bucks at these guys and keep them around? They were quite handy in a tight spot. They filled in nicely under Vigneault's system. They are reliable defencemen. Especially Aaron Miller. His experience counted, and I don't think should be tossed out the door. In the 57 games that Miller played this season, he scored 1 goal and 9 points. He averaged about 17.3 minutes of icetime per game.
Mike Weaver played 55 games and only managed 1 assist. He averaged 14:02 of icetime per game and only had 33 minutes in penalties.
So sure, these guys weren't giving the Canucks any offence but they were reliable stay-at-home defencemen. But maybe that's part of the reason their contracts aren't being renewed. When Ohlund, Krajicek and Salo get injured, their offensive production is sorely missed, as the Canucks' d-men are (were) definitely their secondary scoring. But Gillis is going to change that this summer right? We are going to get more scoring up front. That will take the load off the shoulders of the Canucks' defence somewhat. Maybe then you can keep guys like Miller around.
Who from the Manitoba Moose is going to fill in? I can't really answer that. Is it Nolan Baumgartner? It sure as hell isn't Jim Sharrow. Maybe it's the small-guy that impressed Vigneault last season: Patrick Coulombe.
All I'm saying here is that if Aaron Miller especially is gone, I will miss him and think it's a shame. Speaking of shame, this is where Luc Bourdon (RIP) will be missed as well. We'll see what Gillis has in mind to fill in the 7th and 8th defence spots.

-You should love Aaron Miller. He dragged down Crosby at GM Place last year giving The Kid a penalty shot...which Luongod stopped masterfully I might add!

-During one of the best games last year, Weaver fights the Oilers' Glencross.