What type of style will Barry Melrose coach?

Share All sharing options for: What type of style will Barry Melrose coach? 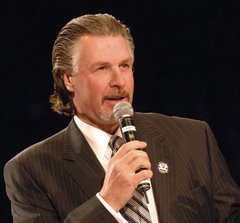 As reported by Melanie Formentin at the Lightning's site: Last Thursday, Steven Stamkos and Barry Melrose were introduced to Lightning fans during a season ticket holder meet and greet. Melrose, in true salesman fashion said:

"Skating and speed is used defensively, it’s used offensively," Melrose said. "We’re going to be physical. You’re going to see a lot of hitting. And again, this is not going to be a nice place to play. When teams land in Tampa they’ll say ‘We’ll take tonight off and get two (points) in Florida tomorrow."


I didn't see the whole press conference, but one Lightning fan mentioned:

"The style of game we’re going to see from him is something I’m really intrigued about," Eric DuBose, a 4-year season ticket holder said of Melrose. "It sounds like more of an up-tempo style that we’re used to playing, but on top of that we’re going to turn ourselves into a hard-hitting defensive team with a run-and-gun system. It’s exciting."

Right. "Run and gun". Know what that reminds me of? The Maple Leafs. That style of play isn't the winning way in today's NHL. Last time I checked, the 2 teams in the Finals were very responsible defensively. Are the Lightning going to try win games 5-4? I know this type of hockey is exciting, and sure, I miss the 80's style of hockey, but it doesn't work when most of the other teams don't play that way. Hey Barry, this isn't Los Angeles in 1993 anymore! The game has evolved since then!
Jeez, new Bolts goalie Mark Smith may be seeing a lot of rubber this coming season. This will be a massive change from what he was seeing in defensive Dallas.
There's no doubt the superstar players will like his style of coaching as well. But will it win? Stay tuned I guess. The Bolts are bolstering their attack lines. It seems they have contracts set for both Gary Roberts and Ryan Malone. 2 great acquisitions. Oh yeah, they have Prospal back as well.
Fine and dandy, but check out their defence core. There are rumors out there that Tampa is trying to shop Dan Boyle, further depleting their D.

**UPDATE**
I guess you can add Brian Rolston to that list of forwards in Tampa now! Yeesh! Thanks for the tip, GZ Expat.