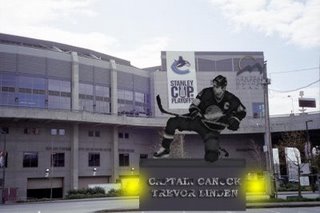 Saw this story over at Canucks and Beyond by Grandmaster A (Alannah): The Vancouver mayor's website mentioned yesterday that

I was checking out the Canucks.com forum earlier this morning, and a poster had mentioned that there should be a Linden statue erected in front of GM Place (for example). Rather than posting something and getting into a pissing match with a mostly cranky bunch of forum folk, I figured I'd make my point here.
A statue is a possibility, given Linden's hero status in Vancouver. But that notion makes me laugh. This isn't Wayne Gretzky we're talking about. No Stanley Cups were won under Linden's tenure here. Sure, he has given so much to the community and was a sweetheart of the city, but let's be realistic here. I like statues erected of CHAMPIONS or WAR HEROES or Dead Prime Ministers. Linden doesn't really fall into that category literally as much as figuratively or symbolically. Too me, that's not good enough.
Name a bridge and/or street after him. Have a Trevor Linden day, even though that one is a bit questionable as well. Wait, no it's not....they have an Earth Day...so...)
Retire his damned number 16. That would be classic. And do it on opening night of the 2008-09 season.
But let's not turn him into god status. You can love the guy all you want to, but there's no point in going overboard.
Maybe I just haven't been a Linden fan long enough to really understand this mostly overblown nostalgia. Maybe that gives me a better perspective of the whole matter as a somewhat outsider. I'll go with the latter. Screw the statue. Screw Trevor Linden

Day. Hey, how about a Stan Smyl statue as well? Has everyone forgotten the Steamer?
Smyl played 13 years as a Canuck, led the team to the 1982 Finals, scored 673 points in 896 games as a Nuck and had been in the organization for over 25 years as a player, assistant coach, affiliate coach, etc. There's some more dedication for you.
Stick with the street and bridge names, and retire his jersey...good enough. Stop overreacting. I get it: he was a classy, gutsy, charitable guy. Don't think I don't understand that.
The first captain that leads this team to a Cup win gets the statue...how's that?

- Now, a Gordie Howe statue at the Joe Louis Arena is worthy!

- Maybe I'm just too young to be able to recognize who the hell all these BlackHawk players are in this statue located outside the United Center in Chicago. I see Bobby Hull. Which is Stan Mikita? Is that Belfour?

- A no-brainer. A Wayne Gretzky Drive and a statue of the Greatest One.

- Interestingly enough, this writer states that a Mario Lemieux statue needs to be erected in front of the Penguins' new arena. He's right. I know where the statue is....it 'dove' into a pool. Yeah, that's right. Can't put up a statue that will fall over every time that someone brushes against it. Did I ever say that I am a Lemieux-hater? Haha.