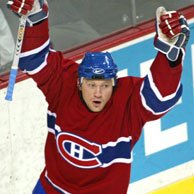 -I didn't notice this until I visited The Yankee Canuck, but it appears the Predators have signed our own Drew MacIntyre. I guess that leaves our backup role to ol' what's his name.....oh yeah, a guy that looks like the 3rd Sedin, Cory Schneider. No problemo!

-The Bruins have signed Michael Ryder to a 3-year $12 million deal. That is pretty risky, but I think Ryder needed a change of scenery. Now he could score over 30 goals for the B's. I guess Ryder is the replacement for Glenn Murray.

-The Islanders make their first signing today, locking up Mark Streit to a 5-year $20.5 million contract.

-The Wild have signed Craig Weller to a 2-year $1.2 million contract.

-The Lightning have signed goon David Koci to a 2-way contract.

-The Rangers have signed Wade Redden to a 6 year deal that will pay him $6.5 million per season. Funny, I predicted this to someone earlier in the day. The Rangers need a go-to-guy on the blueline who's name isn't Rosival or Tyutin. This is a huge addition by NYR.

-The Devils, continuing down their retro path, have now signed Bobby Holik to a 1-year $2.5 million deal. Rolston and Holik....what's next? Neil Broten? Stephane Richer?

-I'm sorry, but the Canucks signing Darcy Hordichuk for 2 years doesn't exactly get my juices flowing. Are we that much in need of a goon? I guess since the Backes attempt failed that Gillis looked elsewhere for a brawler.
The former alter boy/current christian Hordichuk has said in the past that he loves to bring the crowd to their feet. He is fearless, but probably has more of a losing record in fights.
Here is a Hordichuk highlight-profile clip.You'll see his christian roots in this clip.

-The Rangers have signed journeyman Glen Metropolit to a 2-year deal.

-The Rangers finally get active and sign Patrick Rissmiller.

-The Flyers have filled the hole left by Gauthier by signing Ossi Vaananen to a 1-year $1 million deal.

-Spector's is reporting that the Devils are on the verge of bringing back Brian Rolston to the tune of a 5-year $20 million contract. And to think that Rolston left the Devils years ago as merely a checker. Now he will be relied upon heavily to score goals.

-the Blue Jackets have signed Mike "annie" Commodore to a 5-year $18.75 million deal.

-the Blues have matched the Canucks' offer on David Backes. So try again, Gillis.

-the Sabres have signed Patrick Lalime to a 2-year $2 million deal, reports say.

-I can see why the Hawks let Rene Bourque go so easily this morning. They have just signed Brian Campbell to an 8-year deal at a whopping $7.1 million per season. Wow. This should generate even further excitement in Chicago...FINALLY. Players actually want to play there now. The Hawks are getting better and better.

-the Senators have signed Alex Auld to a 2-year $2 million deal.

-It is confirmed that the Lightning have signed Kolzig to a 1-year $1.5 million deal. Kinda cheap no? Kolzig's stock has dramatically fallen. Remember my previous post about how Tampa can lure guys there? Ha!

-the Avalanche have signed Darcy Tucker to a 2-year $4.5 million contract. Great, now we have to play against that guy WAY more often.

-the Canucks have signed Blues' restricted free agent David Backes to a 3-year $7.5 million offer sheet. The Blues have 7-days to match. Aha! Gillis is the first GM to stab at a RFA! Backes is a promising talented winger. He scored 10 goals and 23 points in 49 games in 2006-07 and 13 goals and 31 points in 72 games for the Blues last year. Last year was probably a reduced role, not sure.
Hockey's future described him as

a hard worker who is a dynamic playmaker, Backes uses his size to his advantage when carrying the puck. His skating ability is not greatly impressive, but he possesses a nose for the net. Standing 6’3, he is not afraid to get physical out on the ice and create space for himself by grinding it out along the boards. Backes is respectable in the faceoff circle, but has been used primarily on the wing in St. Louis.


The best Backes video on YouTube is of him pounding on a Finn at the IHWC in 2008.
Another clip of Backes shows that he has hands as well, scoring top shelf against the Wild.

-the Black Hawks have signed Cristobal Huet to a reported 4-year $22.4 million deal. I believe the Hawks have over $12 million invested in goalies now. Yeesh. Is a Khabibulin trade coming?

-the Panthers finally do something...signing Cory Stillman to a 3-year $10.6 million deal. Wow, Stillman must love that. He was becoming a rental player
last year. This deal replaces departed Jozef Stumpel. A serious upgrade IMO.

-the Lightning continue their signing frenzy....signing Adam Hall to a 3-year $1.8 million deal.

-the Rangers have signed Aaron Varos.

-the Penguins have signed goon Eric Godard. Georges Laraque must be on his way out.

-it looks as though the Lightning may be close to signing Olaf Kolzig. Finally, a solid #1 goalie in Tampa.

-the Leafs have signed D Jeff Finger to a 4-year deal at $3.5 million a season

-the Avalanche have signed Andrew Raycroft to a 1-year deal, on the heels of the Theodore loss.

-the Capitals, who seem to be losing Huet, have signed Jose Theodore to a 2-year deal.

- another rumor is that a team, believed to be the Canucks has offered Mats Sundin a multi-year $10 million contract. I'll believe that when I see it. Is Mats even looking for a multi-year deal? He seems so non-commital ever since he enjoys Swedish pie as a midnight snack. (I'm going to hell)

-a rumor going around is that the Penguins have made Jaromir Jagr an offer.

-Flyers traded Dennis Gauthier and a 2nd round pick in 2009 to the Kings in exchange for 2 prospects (PATRIK HERSLEY AND NED LUKACEVIC).

-Hurricanes traded Erik Cole to the Oilers for Joni Pitkanen.

-BlackHawks traded Rene Bourque to the Flames in exchange for a future second-round draft pick. 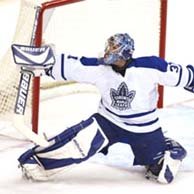 -Leafs sign Curtis Joseph to a 1-year $700,000 deal. Any Leafs fan with a Cujo jersey can not feel so ripped off now!


Mon 11:30 pm
-Brian Rolston is not a Bolt yet. He just may bolt for free agency elsewhere.
Tuesday