Share All sharing options for: Trevor Linden to announce retirement on Wednesday 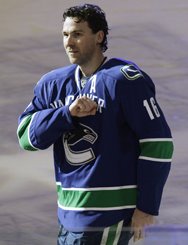 After playing 18 seasons in the NHL, Vancouver hero Trevor Linden will announce his retirement during a press conference. This will be a day of mourning for Canucks fans (like we needed any more of that). Linden was the heart and soul of the Canucks for a long, long time. Now the torch will be passed.
Contrary to some people's opinions, I think he still had some gas left in the tank. Not a lot mind you, but his presence on the ice and in the locker room was such a huge asset.
This almost happened last year, as Canucks management had to ponder whether or not to sign him for one more year. But thankfully, he did play one more year.
Tomorrow will be a day of reflection for the big guy. It will be a day of so many thoughts and memories. We'll deal with all of that after the big impending announcement.