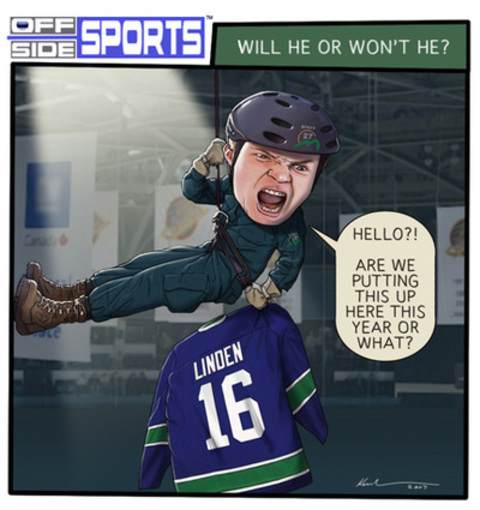 If the rumors are true, then the last time we will have seen Trevor Linden was in a complete joke of a game with a touching ending (look closely for the Linden-Bourdon embrace if you like torturing yourself).

It's been said here before and worth repeating now: the Vancouver Canucks are short on franchise heroes, short on franchise achievements and short on players who deserve to be up in the rafters. Trevor was that hero, spanning multiple generations of fans and putting up with the Messiers, Keenans, Vigneaults and lockouts along the way with class and dignity. Trevor had those club achievements (five in total including the post season). He was a fixture at Canucks Place and around town in the offseason; he's the definition of the hometown boy done good. So, yes, in due course it'll be time to shuffle #12 over a bit in the GM Place rafters to make room for #16 because if you can't retire Linden's number, then you can't retire anyone's.

An aside - is anyone else astonished how incredibly bad this offseason has been so far? Here's hoping Mike Gillis does something, you know, positive soon or there won't be enough alcohol and uppers in the province to restore anyone's smile. (OK, fine, I lied, getting your hands on drugs likely won't be the problem. Share liberally with your friends).

At any rate, there can't be enough glove taps out there for you Trev so we proudly salute you over and over again. Here's hoping you stick around the team and don't go gently into that good night.