Trevor Linden may not have a role with the Canucks organization

Share All sharing options for: Trevor Linden may not have a role with the Canucks organization 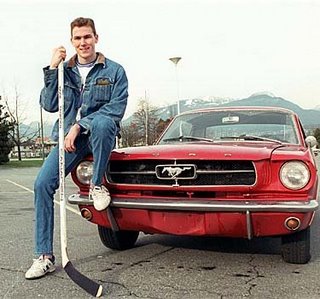 Iain MacIntyre has a great piece about Trevor Linden in the Vancouver Sun today. What I found most interesting was what Linden's father, Lane had to say about what he thought his son should do post-Canucks.

"I would be so disappointed if he just went right back into the hockey end of it," Lane said. "He's been under some body's thumb his whole life, whether it be coaches or managers. There are so many opportunities out there for someone with ambition. We talked about that on the [Canucks' fathers-and-sons] road trip in March. I said: 'You know what son? Trust me, if you decide you don't like what you're doing, you can always go back to hockey.'
He and his younger brother Jamie are so close. They work so damn hard and they've got lots of jump, lots of hustle. I think it's time for Trevor to try something else."

Well, nothing like your father dictating your career for you to the media, verbally anyways.
MacIntyre has his own interesting point about Linden's possibility of working for the Canucks' organization.

Any chance that he'd stay with the franchise -- as a player or in any other position -- ended when Nonis was fired in April and replaced by Mike Gillis, a former player agent and friend of Bob Goodenow, the NHL Player's Association boss Linden overthrew in 2005 in order to broker an end to a lockout that scuttled the 2004-05 season.
It would be unfair, however, to blame anyone for Linden leaving the franchise. Nonis was willing to create a meaningful role for Linden in hockey operations, allowing him to learn the management side of the business the way former player Steve Yzerman is in Detroit and Ron Francis in Carolina.
But Linden revealed privately last summer that he was wary of taking a job that could be construed as ceremonial or bestowed upon him on reputation instead of merit. He said if he was to stay in hockey after retirement, he might have to be start with another franchise where he wasn't viewed as the favored son.

Good points. How much animosity is there between Linden and Gillis? If these come into play, Gillis will be a major goat to Canucks fans. That's business, right? I couldn't see Linden in a management position with the Avalanche, for example though......YIKES. I just can't see it.
Maybe Trevor will stay away from hockey for a while and come back to the Canucks organization further down the road, when a conflict of interest isn't present.
As fans, we want to see him behind the bench, being the great leader that he is, or up in the cushy GM box in GM Place, orchestrating a competitive team. That would be our wish, wouldn't it? I hate to break it to you, but don't get your hopes up too high on that one. Not yet.

Photo by Brian Kent of the Vancouver Sun.